The Kalyan-bound slow trains will now use the new platform in Parel, which will help in reducing the pressure on the existing platform 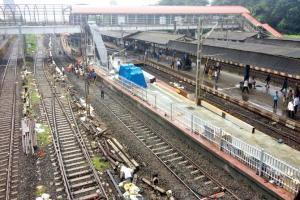 The new platform, which will cater to Kalyan-bound local trains, will reduce pressure on the existing one


After working on commissioning the new platform at Parel station since Sunday morning, Central Railway officials finally opened it up for commuters, with temporary connectors in place, by evening. The Kalyan-bound slow trains will now use the new platform, which will help in reducing the pressure on the existing platform.

The track in the middle of the two platforms, likely to be completed by December, will cater to Parel terminus, where local trains originate and terminate. This will have three benefits — the crowd at the existing Parel station will reduce, the platform width will increase by 1.5 metre and the new bridges will get connected.

Unburdening Dadar
Speaking to mid-day, a railway official said, "The main aim was to take the load off Dadar terminus and provide relief to commuters at Parel. The Parel terminus will exclusively handle slow trains."