The Mumbai Police had also booked Lakdawala in over 20 cases of extortion, attempt to murder and rioting. 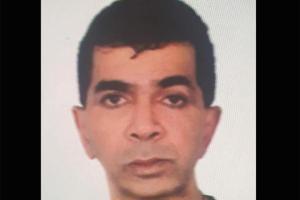 
Fugitive gangster Ejaz Lakdawala was arrested by the Mumbai Police in Patna on Thursday. He has been remanded in police custody till January 21 and has a total of 27 cases registered against him in the city.

The Mumbai Police had also booked Lakdawala in over 20 cases of extortion, attempt to murder and rioting.

Police sources said Ejaz had moved to Canada in May 2003, after he was severely injured when Dawood’s henchman attacked him. In March 2019, the anti-extortion cell had arrested, Akil Lakdawala (53), Ejaz's cousin, for threatening a Khar-based builder and trying to extort Rs50 lakh. Ejaz, too, was booked in this crime.

Meanwhile on December 27, 2019, Ejaz's daughter, Sonia, was arrested at the Mumbai international airport for using a fake documents to make a passport. She was arrested while she was leaving for Nepal.

Ejaz was a leading shooter with D company before Dawood Ibrahim and Chota Rajan spilt up. In 2000, Chota Rajan was attacked in a shoot out at Bangkok by Dawood's men after his which Rajan's gang split and Ejaz formed his own gang.