skymet warned that heavy showers, likely to occur from August 3 onwards and extend to August 6, may lead to waterlogging and flash floods in Mumbai 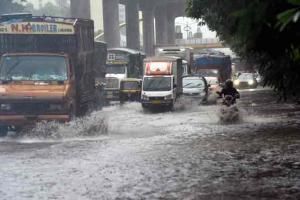 
Mumbai has been experiencing light to moderate rains with occasional intense spells throughout the week, which is likely to continue on Saturday. According to the private weather agency Skymet, the city and suburbs are likely to experience heavy to very heavy rains on August 3 and August 4.

The private weather agency warned that the heavy showers, likely to occur from August 3 onwards and extend to August 6, may lead to waterlogging and flash floods that may cause disruption to daily life.

Skymet has advised people to stay at home on these days and not to step out unless necessary. The private weather agency also said that the city will possibly see the surge in the intensity of the rains from Sunday evening.

The agency also said that the city is likely to witness moderate to heavy rains on August 6 after which the intensity of the showers will see a drop. Nevertheless, the city will possibly surpass the monthly average of the rains received in August.

July ended on a wet note with the city receiving 40 per cent more rains in the month. Against the normal benchmark of 12.51mm rains, Mumbai has received 1754.1mm rains, Skymet reported. Many areas in Mumbai recorded light to moderate rains and thundershowers on Friday. The Santacruz observatory recorded 0.6mm rains on Friday, whereas the Colaba observatory recorded 3mm rains.

The India Meteorological Department (IMD) predicted generally cloudy skies with moderate rains in the city and the suburbs on Saturday. However, it has also expressed a possibility of occasional intense spells for the day.

Monsoon Likely To Be Normal In Second Half Of Rainfall Season: IMD

For more details on Mumbai rains, check out the app Mumbai Rain by Skymet.

Next Story : No plans to interrogate Rhea now: Bihar Police