Mumbai received 1502 mm rainfall in July, highest-ever in the month

Having surpassed its monthly average rainfall of 840 mm, Mumbai received 1502 mm rains in July this year 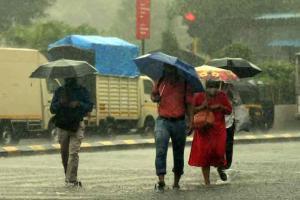 July is the rainiest month for #Mumbai with a monthly average of 840.7mm. This year, Mumbai has already recorded 1502mm rain which is the highest ever rainfall received by Mumbai in July.#MumbaiRains #mumbaimonsoon #Monsoon2020 @MumbaiRainApp https://t.co/jB9NIasXwA

The private weather agency said in the report that even though Mumbai experienced the highest ever rains in July, the city has not experienced severe waterlogging or flash floods as the showers have been well distributed throughout the month.

Despite the highest July rain, #Mumbai has not witnessed severe waterlogging and flash floods, as these rains were well distributed throughout the month.#MumbaiRains #mumbaimonsoon #Monsoon2020 @MumbaiRainApp https://t.co/jB9NIasXwA

Skymet also said that Mumbai, Thane and adjoining areas have witnessed moderate to heavy rains with intense showers in the last week of July. Even as the rains were not widespread and continuous, the showers caused waterlogging at isolated low-lying areas.

The private weather agency also predicted that August will begin on a wet note with the possibility of heavy to very heavy rains between August 2 to August 6 with chances of a few intense spells in the city and the suburbs.

After the highest-ever July rains, the first week of August is going to be rainy for #Mumbai and suburbs. #MumbaiRains #mumbaimonsoon #Monsoon2020 https://t.co/jB9NIasXwA

The India Meteorological Department (IMD) predicted the possibility of enhancement of rain activities over the west coast towards the south Konkan region that is likely to cause heavy rains in the areas in the next 24 hours.

As per IMD GFS guidance there could be enhancement of rains over west coast from today onwards from S Konkan
N Konkan including Mumbai, Thane NM likely to get hvy rains from Sunday. 4-5 Aug trend likely to continue with further increase.
Nxt 24 hrs that areas hvy falls likely.
TC pic.twitter.com/VMJQTiw5Sj

For more details on Mumbai rains, check out the app Mumbai Rain by Skymet.

Next Story : As economy reopens, labs getting mass test requests from corporates