Amitesh Kumar, joint CP (traffic) to meet representatives of cab aggregators after reading mid-day's exclusive report on the tragic incident that claimed 35-yr-old Tanzila Shaikh's life on June 14 after the Uber cab she was in crashed into a dumper 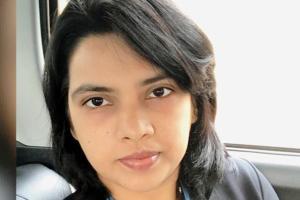 
The services of taxi aggregators have come under severe censure following mid-day's report on July 12 about 35-year-old Tanzila Shaikh who lost her life on June 14 after the Uber cab she was in crashed into a stationary garbage truck at Bhandup. Amitesh Kumar, joint CP (traffic), has taken cognizance of mid-day's exclusive report on the incident and said he would be meeting representatives of all such aggregators soon.

"From the safety aspect of passengers, and in light of the recent incident reported and other cases that have come to our notice, we will be calling in Uber and other application based cab service representatives for a meeting soon." He added, "We are in the process of coming up with a QR code and Infrared Code for regular black and yellow taxis from the commuter safety point of view. Ola and Uber are given permits by the State Transport Commissioner offices and have to follow their permit norms."

The car after the crash

Cancel Uber's licence: WIAA
The Western India Automobile Association (WIAA), one of the largest motoring organisations in Asia, has demanded the strictest action against the driver and Uber. "We will be having a meeting with the transport minister soon after the monsoon session is over and will insist that Uber's licence be cancelled. We have received numerous complaints against Uber drivers and have time and again raised this concern with them but nothing has changed," said Nitin Dossa, executive chairman, WIAA.

He added, "We are also shocked that instead of immediately revoking/suspending the licence of the driver, Inderjit Singh, all authorities [police, traffic department and transport commissioner's office] are waiting for paperwork to be completed first," he said.

Police surgeon to act on complaint
Dossa said, "It is disheartening to learn the trauma that the family had to go through. First, the demise of their loved one in a horrific accident, and then motor vehicle insurance agents approaching the family asking for a cut from the compensation. We will demand a high-level probe against such insurance agents and insist that the sanad (licence) of the lawyers supporting these agents be cancelled immediately. We will help the family approach the Motor Vehicle Accident Tribunal, with no cut in compensation."

On mid-day's report that information about the family was being passed on to insurance agents by post-mortem centre staff, Dr SM Patil, police surgeon and medico legal advisor to the state government, said he was aghast.

Muzammil Shaikh, Tanzila's husband, had said he received calls from two lawyers who offered him assistance in filing the Motor Vehicle accident claim at the tribunal against commission of 21 per cent of the compensation amount. Dr Patil said, "We will be conducting surprise checks through dummy agents to nab the culprits at postmortem centres who are leaking information." He cautioned postmortem staff against this practice, failing which he promised serious action against the staff for dereliction of duty.

Family still mourning
Muzammil Shaikh, Tanzila's husband, had learned that the car in which she was travelling did not have any GPS connection to track the vehicle. The only tracking device was the iPhone that the driver had got from Uber, which once switched off, would be impossible to trace. It also turned out that the driver had several speeding violations against his name.

Muzammil said when he unlocked Tanzila's mobile phone a day after she had died, he was shocked to find a message from Uber saying that her trip had been completed (Goregaon to Airoli) and they had debited her Paytm account of R568.10. Tanzila was killed at Bhandup, a long way from Airoli.

He said, "I know that unless the driver reaches the destination and the same is not displayed on the iPhone GPS, the trip is not complete and no charges can be levied before that, as the system does not even know the exact fare till then. Why is Uber not able to answer how the system showed the trip as 'completed'?" After complaints by Muzammil, the amount was refunded by Uber.

Muzammil is upset with the fact that Uber, instead of owning responsibility, is passing the buck to the driver. "I asked the Uber customer support about the compensation policy in case of a death, as the vehicle and driver were associated with their company. The staff said Uber did not have any compensation policy and that the accident was due to the partner driver and it is he who should be paying compensation," he said.

Driver admits car did not have GPS
The driver, Inderjeet Singh, 59, said he had been working with a private travel agent in Andheri on a salary of Rs 15,000. Just three to four months ago, his employer had tied up with Uber, and ever since he had been ferrying customers for the aggregator.

Singh said, "It was a basic car, with no safety features like air bag or ABS wheels, etc. Uber had given me an iPhone for tracking. When I called the customer care number for drivers soon after the accident, they told me to get admitted to a hospital and show the mobile application at the hospital. I was told that the entire medical expenses would be taken care of by Uber."

While the driver claims that the car had speed governors and he could not have been speeding at 100 kmph, experts say these claims will be rubbished once the RTO team inspects the car.

Uber says
A list of questions were sent to Uber, but instead of answering them, the company spokesperson sent the below information, which raises even more questions:
* This matter was reported to us directly by the driver partner on June 14 who was himself heading to the police station after first aid post the incident.
* We have extended support to the police authorities in the matter and stand ready to support the investigation further.
* Both the driver partner and the victim received grievous injuries, unfortunately, the victim expired. The driver partner was receiving treatment at a hospital.
* The driver partner's access to the app was removed immediately after the incident.
* The driver partner's background verification was clear. While no one can predict when accidents strike, this is indeed unfortunate.

Uber did not say
How and why Inderjit Singh's earlier traffic violations were ignored. On April 23 and April 27, he had been found speeding at more than 98 kmph on the Eastern Freeway and fined Rs 1,000.

Driver says
On Thursday, Inderjit Singh, told mid-day that he had been taken by the police to a BMC hospital at Tagore Nagar, Vikhroli, after he complained of chest pain. An X-ray showed no internal injuries. In the evening he was taken back to Vikhroli police station and the next day the Metropolitan Court, Mulund, released him on bail of Rs 15,000. This quashes Uber's claim about the driver receiving 'serious' injuries.

Police say
* We have not yet sent any memo to the RTO asking for revoking/ suspending the driver's licence
* We are willing to offer complete support, information and data for processing third party accident/ insurance claims, etc.

Next Story : Death of Dada Vaswani a month before he turned 100 leaves followers dismayed