A fire brigade personnel rushed to the spot and doused the fire, but Shinde was already dead 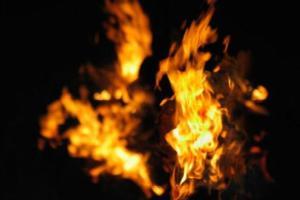 
A 55-year-old man was charred to death after his car, which contained a bottle of inflammable hand sanitiser, caught fire in Nashik district of Maharashtra, a police official said on Wednesday. The victim, Sanjay Shinde, was a taluka unit vice president of NCP, police said. "The incident took place on Tuesday afternoon, when Shinde, a resident of Sakore village was on his way to Pimpalgaon on Mumbai-Agra road, to purchase pesticides," the official said. "The car caught fire near the Pimpalgaon Baswant toll plaza possibly due to short-circuit in the wiring ," he said.

"After noticing the flames, Shinde tried to stop his car, but he could not get out as its doors got locked. He tried to break open the window, but was unable to do so. The fire soon spread and he was charred to death inside," the official said. "We found a bottle of hand sanitiser inside the car, and we suspect that the blaze might have spread quickly due to it as it is an inflammable substance," he said. Shinde, who was a well-known grape exporter in the Nashik district, he said.

After being alerted, the fire brigade personnel rushed the spot and doused the fire, but Shinde was already dead, the official said. A case of accidental death was registered at Pimpalgaon Baswant police station, he said.