Vada Dasturji Khurshed Dastoor of Udvada, who until last year was in favour of Metro III, says high priests were misinformed about alignment and demands for the proposed tunnels to be realigned 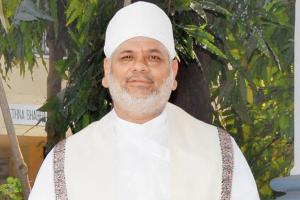 
The high priest of Udvada, Vada Dasturji Khurshed Dastoor, has seemingly had a change of heart on the controversial Metro III alignment. Months after claiming the Metro tunnelling work won't harm the Parsi community's sacred Atash Behrams, he is now of the opinion that the project should be realigned to protect the structures.

In a June 8 letter to the group of Parsis who have petitioned against the Metro, he has also stated Metro authorities fed him 'misinformation' when he met them last year.

Khurshed Dastoor, who was also appointed last year as a member on the National Minorities Commission, had visited MMRCL officials in October 2017. After the meeting, he'd announced he was fully satisfied with their explanation that the tunnel alignment does not come in the way of the sanctum sanctorum or the well, thus drawing flak from those strongly seeking realignment.

Fed 'misinformation'
Now, at a time when the entire community has come together demanding the realignment, Dastoor, too, holds a different opinion on the issue. He wrote in the June 8 letter: "As I have stated previously, had I known about the alignment of the tunnels below these two pious buildings earlier, I would have surely objected to the same and also suggest realignment." He further alleges the Metro authorities had fed him 'misinformation' last year.

"It is only when we, the high priests, were consulted last year, that too with misinformation about the realignment, about the tunnel not passing through the sanctum sanctorum of Wadiaji Atash Behram, did I step in to know the truth from the Metro authorities and presented the facts to the community," he wrote in the letter.

Speaking to mid-day from New Delhi, Dastoor said: "Last year, MMRCL clearly said the tunnel(s) cannot be shifted. We'd requested them to realign, but they said there was no alternative, and assured us they would take utmost care and precaution. That is why at the time I said it was okay to go ahead with the tunneling because there wasn't any other option."

What changed?
So what made him change his mind? It was Hafeez Contractor's realignment plan, later submitted to the authorities. When asked whether MMRCL had misled the community, Dastoor said: "Let me be fair. MMRCL had limitations of design, whereas Hafeez Contractor is a master of architecture; what he designs and what other people design is quite different. Hafeez found out the way to realign it."

Reacting to those pointing fingers at him for his drastic change of stance, Dastoor said: "At the time, I was told there was no alternative and even today if I am told the same thing, I will stick to my stance that the project can go ahead. But if an alternative is available, then it should be worked upon." As for the letter, it culminates with Dastoor asking for the realignment: "In conclusion, I reiterate that if there is any possibility to realign the tunnels to preserve the sanctity of these edifices, then the same should be undertaken."