Prevent people from participating in the peaceful demonstration, saying Section 144 has been imposed at Bandra-Worli Sea Link promenade 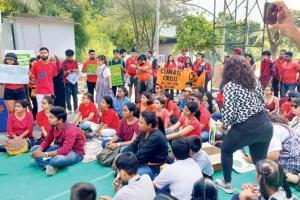 Students and youth at the Extinction Rebellion event in Mumbai


The felling of trees at Aarey forest was meant to be the highlight of a climate march in the city on Sunday, however, the police censored not just the subject and maintained their intimidating presence on the site to ensure the participants are adhering to their order. A group of climate activists, which organised the Extinction Rebellion (XR) — socio-political movement started last year to highlight the adverse climate change — at Bandra-Worli sea link promenade, were in for a rude shock when they reached the spot on Sunday. The cops said we cannot speak about Aarey at the event and they even shifted our venue to a parking lot, said an activist. The last-minute changes were made even though the organisers had taken prior permission.

The censorship reduced the event to a merely 20-minute affair and the participants were not only disappointed but were left intimidated by the police presence at the peaceful protest. An activist even claimed that the cops prevented several people from joining the protest saying Section 144 has been imposed in the area.

A message that went viral on Saturday night about a die-in and citizens' declaration on the climate crisis, attracted huge number of police personnel at Bandra, said an activist. "We are a volunteer-led group, standing up for Indian assets — forests, rivers, wetlands, oceans and animals — which matter to everyone, and specifically Mumbaikars. It's quite shocking to see authorities interfere and be present widely for a pre-planned event on climate change. The event location was changed from the Bandra-Worli Sea link promenade to an inconspicuous and small 'parking lot'," said a group member of XR Mumbai.

"Attendees included children from different schools, youth from city. The youth were disappointed to see the excess police presence for a mere peaceful gathering," the member added. Paramjit Singh Dhaiya, DCP, Zone 9, however, refuted the claims of any kind of force from the police personnel. "There was no problem at all and they (activists) did carry out the event. There were no complaints or any forceful activity from our end. We were just standing at a distance." When questioned about the censorship and the imposition of Section 144 in the area, he did not give any specific answer and instead said, 'the event did take place'.