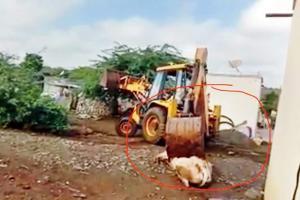 The bull was hit several times by the loader bucket located at the JCB's front, until it died


A bull bitten by a rabies-infected dog was smashed to death by a JCB machine in a village in rural Maharashtra. The incident came to light after a video of the brutal killing went viral on Sunday. One of the two accused booked was arrested on Wednesday.

The video shows the bull being continuously smashed by the loader bucket located at the JCB's front till it dies. The incident occurred on October 27 in Pondwadi village of Indapur taluka which falls in Pune district (rural).

An FIR under Section 429 (killing or maiming cattle) of the Indian Penal Code and relevant sections of the Prevention of Cruelty to Animals Act, 1960 was registered against Rohit Shivaji Atil (arrested) and Bhausaheb Anna Khartode on Tuesday by Constable Nilesh Shinde at Bhigwan Police Station.

"The bull was sick; it had been wreaking havoc in the village after bitten by a mad dog who had rabies," said Assistant Police Inspector Jeevan Mane, Bhigwan Police Station. "On the day the incident occurred, the bull broke the rope that tethered it to the ground and was running around the village. The bull caused damage in the weekly vegetable market, broke the gate of a school, banged into a few two-wheelers, and broke the entrance of a house."

According to Mane, the JCB was nearby when the bull was on its rampage. "When they failed to control the bull, the JCB drivers brought down the loader bucket on it with more pressure, killing the animal."

Speaking to mid-day, Lead Emergency Response Coordinator, PETA, Meet Ashar, who is also an Advisor to the Maharashtra Animal Welfare Board, said, "This is an extreme act of cruelty and nothing less than murder. Causing a bull to suffer in this manner is a punishable offence. This horrific attack is exactly why PETA India urges public to report incidents of cruelty to animals immediately."

He added: "Cattle are abandoned throughout India, especially males, because they are seen as useless in the dairy industry. PETA has long campaigned to strengthen the Prevention of Cruelty to Animals Act, 1960, which contains outdated penalties of R50 for convicted first-time offenders."

2
No. of people booked

Next Story : Mumbai: Borivli court finally gets its magistrates