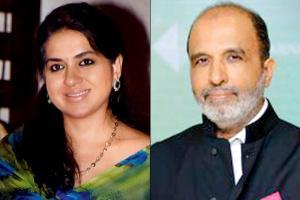 
The Bharatiya Janata Party (BJP) refused to see the five-state election slap in the face as a precursor to the 2019 general elections, and said that those who are dismissing it are speaking too soon. Shaina NC, BJP spokesperson, said, "Consider the fact that the BJP was in power for 15 years and that itself is a victory. There was bound to be a slight anti-incumbency factor. In Rajasthan and Madhya Pradesh we crossed the numbers expected. For Chhattisgarh, Raman Singh has been a brilliant chief minister (CM) but this is a democracy and this is the public speaking."

When asked whether this should make the BJP jelly-kneed about the 2019 elections, Shaina shot back with, "I do not think this is a 2019 mandate. The general elections are about choosing a prime minister (PM), and I think the people will still choose Modi as PM because of his hard work." Asked whether too much focus on Ram Mandir, statues and big talk meant that people feel real issues are sidelined, Shaina said, "Development has and continues to be our plank.

Look at the margins of defeat and victory – 1,000 and 2,000 votes. Is this really a referendum for 2019? When a party's ideology is one of vote bank politics and appeasement, then, eventually, people are going to see through you."

Sanjay Jha, joy evident in his voice, insisted that the BJP Hindutva plank had taken a beating. He said, "The results are a rejection of BJP's Hindutva drumbeat and intensifying communal polarisation of the country. When the BJP's chief campaigner Yogi Adityanath (CM Uttar Pradesh) gives statements like 'this is a battle between Ali vs Bahubali', then you know this is dangerous politics."

Jha claimed that victory in the Hindu heartland was directly attributable to facts like, "Congress addressed rural distress, farmer suicides were a manifestation of that. The party also focused on joblessness among the youth. Four men jumped in front of a train in Rajasthan over unemployment.

Why was nobody talking about that?" Jha said that the BJP has paid for unnecessary stress on inanities like, "Mr Rahul Gandhi's 'gotra'. Rahul Gandhi has been relentlessly abused and maliciously maligned. Yet, the fact is that he has emerged stronger and triumphant. It shows that the aspirations of the Indian people are for a liberal and secular democracy, which the Congress also stands for."
Sanjay Jha: national spokesperson Indian National Congress (INC)

Next Story : After results, recovery and relief