The group of 12 spent 12 days learning sustainable living at the Secmol School in Ladakh, popularised by Aamir Khan’s character in the movie ‘3 idiots’ 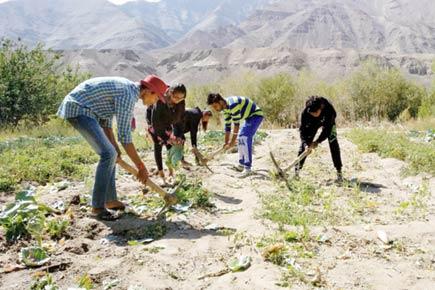 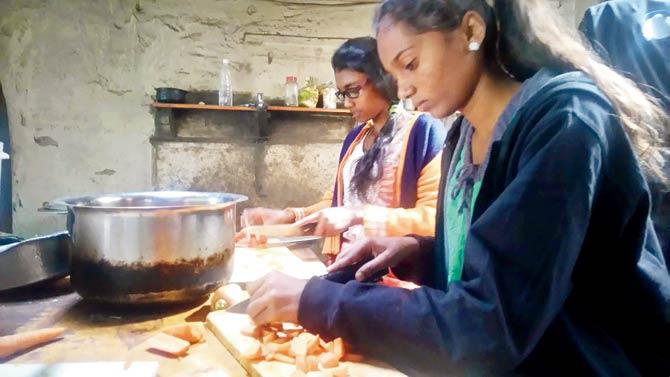 The children had to cook their own breakfast. The teens from Mumbai prepared Maharashtrian delicacies for their Ladakhi counterparts

Twelve of SGNP’s junior residents have lived the life Phunsukh Wangdu – Aamir Khan’s character in 3 idiots – did in his innovative school in hilly, beautiful Ladakh. They recently went on a 12-day trip to the Secmol (The Students’ Educational and Cultural Movement of Ladakh) School and returned with lessons on sustainability along with a treasure trove of memories with their Ladakhi friends. 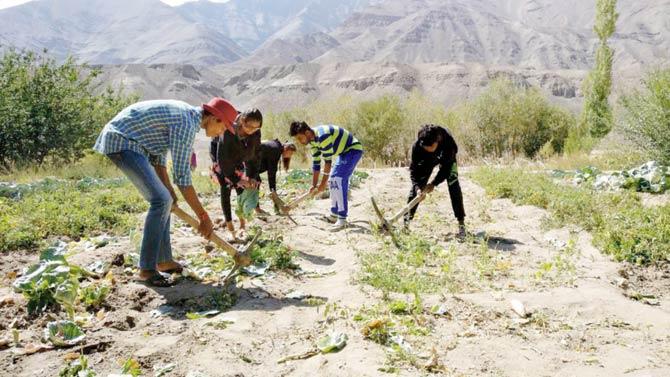 The school has an organic garden, whose produce is used for making food for the children

The Young Innovators Foundation and the 'BookASmile' initiative by Farzana Cama Balpande, organised the ‘Bodhi Project’ under which 12 tribal children, aged between 14 and 16, were taken on the trip to learn sustainable living, and then implement it at the national park. 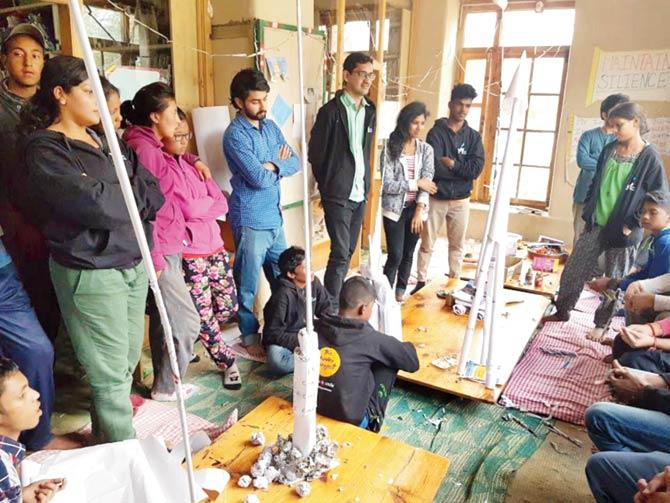 The children also had several workshops. In the one pictured here, they were making towers with paper to exercise the mind for creative thinking

“The school is situated in a secluded location. One can’t find it without a guide. It’s behind two or three hills, but when you reach there, it’s nothing short of a wonderland,” said Balpande, who was there with the children for a day.

The school defines self-sustainability, and how. Right from the bricks to the panels of the solar plant, everything is made by hand. The school maintains a cowshed with 3-4 cows and everything the kids eat is plucked from the organic garden.

The school even has a unique bathroom, where the students use soil and not water to clean the area. “It was a really innovative concept. The toilet was a two-floor building, where one has to go on top to use it. Once a person is done, they have to cover the area with soil kept in a corner. The soil goes down the pipe and is turned into manure for organic plants in the garden,” said Darshana Kolekar, who resides in SGNP’s Tumnipada area. The school is also big on recycling. Right from clothes, paper to plastic, everything goes through a recycling chain.

Breakfast time!
While at the school, the children began the day by making breakfast. The Mumbaikars gave the Ladakhi children a taste of the city by cooking Maharashtrian food for them, while the Ladakhis made local dishes.

Their cultural exchange continued as they spoke about the Ganpati festival, the tribals of Mumbai, the Warli community and its art. They danced too, as the Ladakhi children performed a jig of their local dance.

Later, when the children were not discussing ideas to change the world, they trekked the famous Ladakhi trails. “Taking a kid to a movie, match, teaches them values and lessons one can’t behind closed doors. The tribals especially have their world limited to a jungle, and for them, to not just step out but change the condition of their villages is a matter of importance,” said Balpande.

Holistic approach
Founder of the ‘Young Innovators Foundation’ Ritika Arya, who went with the children and 7 volunteers, said, “We have been in the field of education since 2008. But with time, we have realised there is a difference between education and literacy. We ought to educate the person, not just the mind. There has to be a holistic approach towards educating a child.”

She added, “The kids from the padas need to know what they have, their roots. Through this trip, they will learn to preserve their roots, conserve farming and educate themselves towards sustainable change.”

Solar oven session
The school, which entirely runs on solar power, held a special session to teach the children how to make solar ovens. “At SGNP, there is a huge electricity problem. Not all villages have access to it. We, however, have abundance of natural resources and sunlight, which could be for a solar plant. At Ladakh, we learnt how to make solar ovens, which we are planning to make in our villages. I hope to make a career in science,” said Sandeep Barat, a resident of Navapada.

The children even learnt to make an organic cooler, which is made of grass, soil, white cloth and a simple box, which they plan to make on a bigger level at their pada.

“There was so much to see, learn and say. The kinds were superb in Hindi and we tried to learn Ladakhi language from them,” said Pooja Ganesh Sawak, from the Maleypada.

While in Ladakh, the children also celebrated Teacher’s Day by surprising the volunteers at the Leh market and buying them gifts. “It was heartwarming to see their gesture. After we returned to Mumbai, it was really difficult to part, as we had become like a family,” said Ritika. “In the end, the kids learnt not to limit themselves to organisations or classrooms. The real change comes once we step out,” she concluded.