South Mumbai housing society turns into planet of the apes

Monkey menace has wreaked havoc in the lives of residents at Venus complex, off Worli Seaface – entering homes, stealing food and hurling things down from the upper floors 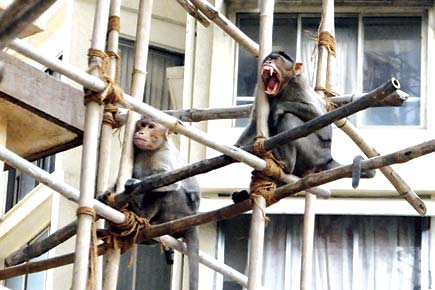 A monkey menace has made prisoners of residents in the well-known Venus buildings complex, off Worli Seaface. The sea-facing towers at Worli are dealing with monkey terror since a while now, but things have escalated to alarming proportions, especially since the past month. 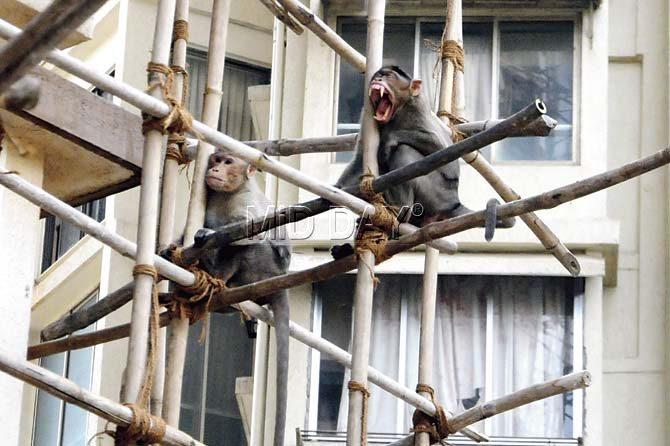 Monkeys sit on a scaffolding at one of the towers in the Venus complex. Pics/Satyajit Desai

Monkeys, at least two of them, though some residents claim to have seen four, are climbing pipes and scaffolding and entering residents’ homes in the buildings. The monkeys are opening sliding windows of the houses, moving inside the flats, going into kitchens and the hall of the homes, taking foodstuff and actually eating it inside the house. 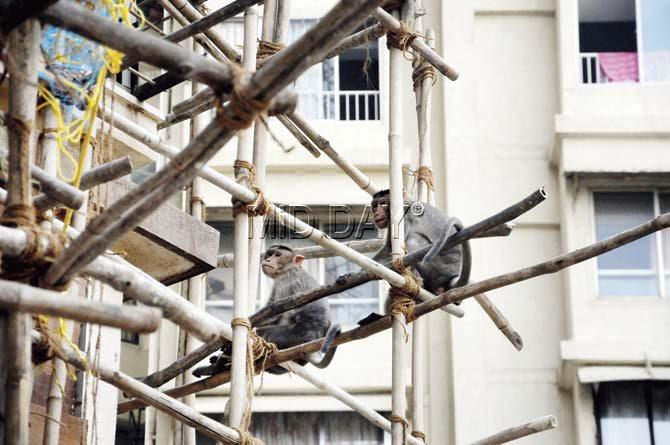 Monkeys on the scaffolding of one of the towers in the Venus complex stare at this writer and photographer as if saying, come and get us

They have snatched jars of fruit, dry fruits, farsan (snacks) cold drink bottles, opening the fridge too for food, mocked terrified residents as they have eaten them in front of them! 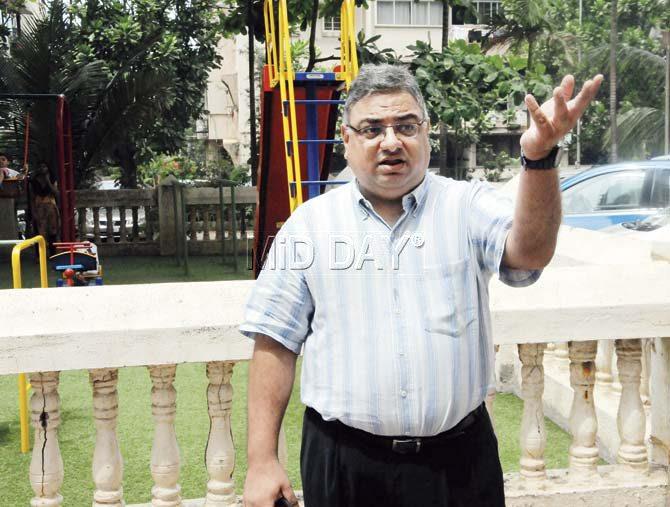 The staff around the building, servants, drivers, those who tend to the small garden and workers (it is a mammoth complex) say that the monkeys are now wandering in passages in the building. A lift man said in alarm, “they now press the button of the elevator!” 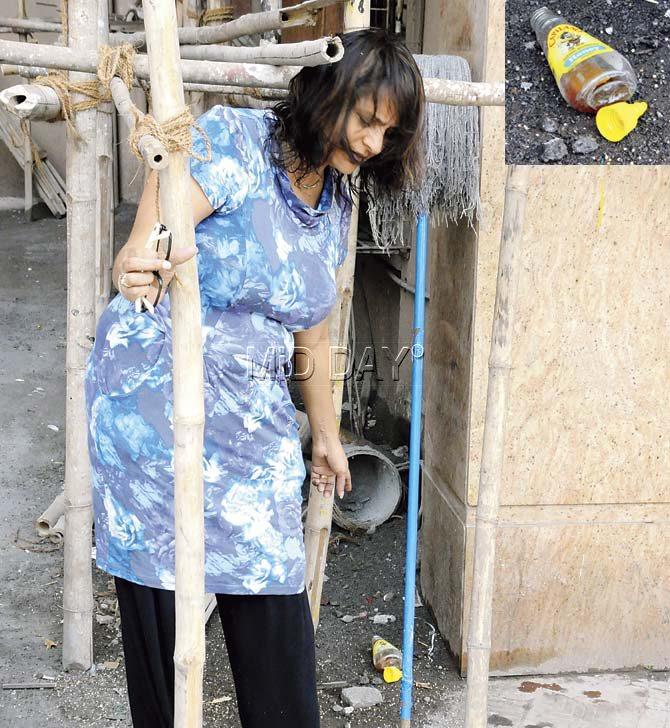 A bottle of honey, taken from a resident’s flat, consumed by the monkey and thrown to the floor

Home attacks
Said Arun Sehgal, Jt. Secretary, Venus ‘E’ building, “The monkey has come into my home by sliding open a window, jumped on the dining table and eaten bananas!” Most residents are aghast at what is happening and have never seen anything like this. 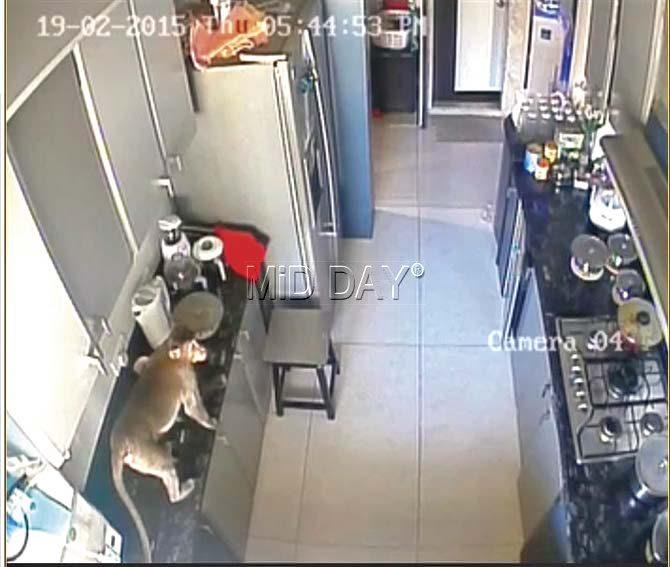 A monkey creates havoc in a resident’s kitchen

A building supervisor said that the monkey has opened the main water tank of the buildings, and tried to drink water. Says Sehgal, “We have appealed to so many people to help us but authorities claim they are helpless. We are living in fear, especially families with small children and senior citizens at home. 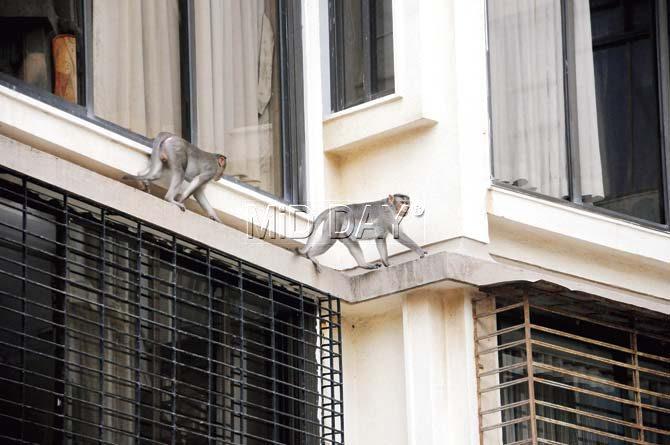 The monkeys walk on the building parapets, looking for an open window to slip into and gain entry into a flat

These monkeys have created a lot of stress.” Sehgal showed a picture taken from his mobile phone camera of a monkey squeezing between the grills outside a window, to gain access to the home. 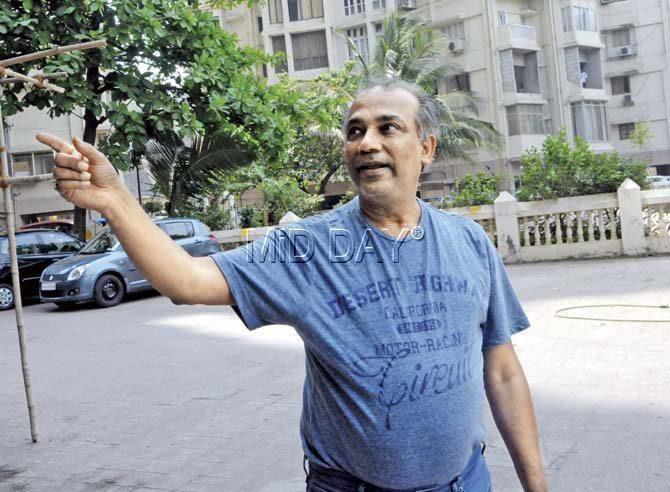 Jt. Secretary Arun Sehgal, points at the monkeys on the parapet of the building, showing how easily they gain access to the homes

Currently Venus buildings ‘E’ tower has scaffolding as there are repairs on in the building. The monkeys are climbing up via the scaffolding. A ‘G’ tower resident though says that they do not need scaffolding to climb, they can use the pipes. Monkeys are adept at opening sliding windows, which are just slightly loose or ajar even an inch or two. 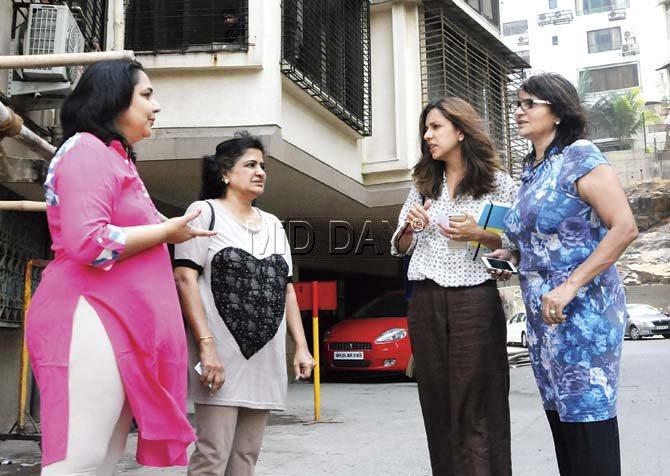 Residents (from l) Madhu G, Vaishali T, Kashish A and Neerja S say the tension and worry is palpable

They have now become so bold that they are walking in the passages of the buildings, between flats. Residents also fear a confrontation between man and monkey. A frightened person may confront the monkey,. They shudder to think what will happen then. 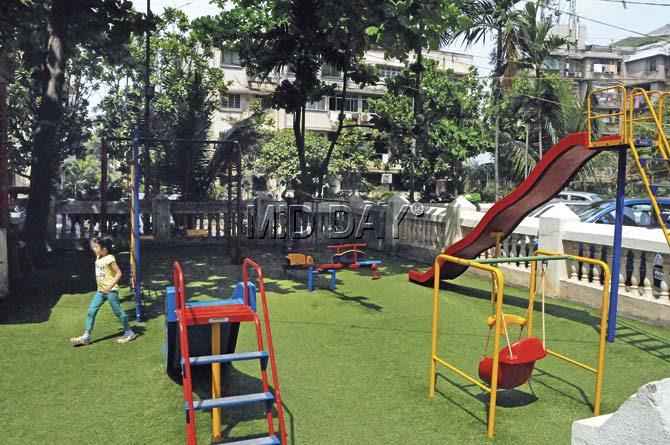 Children are wary of using the park. Monkeys have been sitting on swings and the slide

Says Shameen Adenwalla, “Monkeys entered my kitchen recently. They hit on the sliding windows from the outside and they opened a little. Soon they were inside the kitchen. They opened the fridge and drank juice. One monkey walked around the parapet, he also threw the fridge bottle down on the floor.” 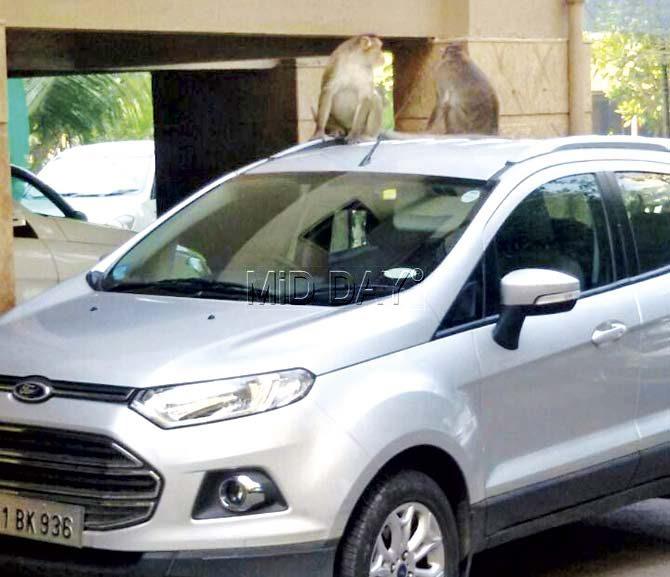 Monkeys atop a car at Venus building, Worli. Residents have taken these from a mobile

Recently, Shameen saw a monkey throw down a potted plant from the tenth floor of a building. “A little child was playing downstairs,. It just missed.” Shameen adds, “A monkey which had entered the kitchen pulled the toaster. My husband was holding on to the wire of the toaster.” Monkeys have also made away with Shameen’s homeopathic medicine from the home.

Babies
Outside the flats, the monkeys do away with the milk packets left for residents in the passage They dig into the garbage cans and garbage is strewn all over the floor at times. They are foraging for food.
Says Zain Rashid, resident “I am worried because I have a six-month old baby at home.

They have consumed bottles of dry fruits. Recently, they ate mangoes from my dining table. It looks like we are the prisoners, sitting in cages. Go to any flat here and see everybody is getting their windows done. They are free and we are cooped up inside.” Zain adds that the monkeys are becoming bolder everyday.

'Once, the monkey grabbed a mithai dabba (box of sweets) from the table. Then it was a tug of war between my father and the monkey. The monkey was pulling the box from one side and so was my father. The monkey was baring its teeth, looking as if it would bite us, if we fought.”

Says Prabhat Chhabra who lives on the second floor, “We have become the monkeys, caged in. We cannot open our windows in this heat. The other day, I returned from a walk at Worli Sea Face late at night and the monkeys were spotted on the second floor parapet. Somebody will get a heart attack if confronted in the house at night.”

The residents see some black humour in the situation. They have given names to monkeys and say to the reporter, “Wait here, the monkey will pose for you. He is the hero of our building.” Says Venus building chairman Prashant C, “I asked my society office for all communication with reference to the monkey catchers. We have now contacted a Sanstha in Matunga, which says that it will charge us Rs 5,000 for a monkey caught. I want a receipt for the same.”

Dangerous
Say the residents. “We want a bill. We want accountability and transparency." They have approached persons who have demanded Rs 5,000 to snare a monkey, but then have no assurances that it will not re-enter the building precinct.

Says Madhu Gupta, “Even a short trip outside now, is fraught with tension. The other day, we were cooking parathas, and that meant a lot of smoke in the kitchen. We just opened the window a little, so that the smoke escapes and the monkey came in and ate the fruits. This is just so scary.”

For Kunda Parikh, it is a case of, “what next?” The monkeys have been to her home so many times, taken food from boxes, eaten it all up and now, she says, “I have also seen a monkey actually get a stranglehold on a stray dog below in the building. They are not scared of the dogs too.”

A resident seconds that saying that the monkeys are getting more aggressive. “They hit the stray dogs.” Another resident pipes in, “they are honorary members of our building. Here without paying maintenance.”Tasneem Kamdar is worried because she has two sons, a 4-year-old and a 1-year-old.

Monkeys have entered her home and she started screaming as her children were playing and the monkeys came close to them. “They were attracted to my children’s colourful toys." Finally, they chased the monkey away with a hockey stick that they have in the house, especially for the monkeys, said Tasneem.

For resident Ashit Sheth, “It is strange why some residents think this is an incarnation of the divine and are feeding the monkeys. We are requesting people not to do so. There has also been talk about whether we can tackle this monkey menace ourselves.

Either through shooting tranquilizer darts or something. Even an electric fence was being considered. I have lived in this building since 1972, but have never seen anything like this, in all these decades.” Though residents are trying to make light of the situation, it is evident that the air is fraught with tension.

With the monkeys hurling plants, boxes, bottles and whatever else they can lay their hands down from a height, it is a matter of time before Venus has a serious accident on its hands. The monkeys are not just a problem but a very real danger to limb and life.