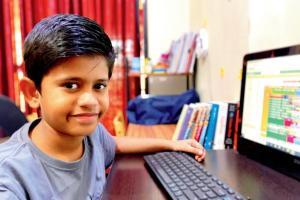 Ayush Sankaran'a app is available for free on Playstore


The students of Billabong High International schools are enjoying learning the Harry Potter series in their curriculum, thanks to a Std IV student from their Malad branch, who has developed a quiz-game app, World of Magic, on the popular children's books. It is available on Playstore for free.

Nine-year-old Ayush Sankaran won the MIT Inventor of the month award for this app, in the category of app developers under 12 years from across the globe recently. After a brief discussion with his teacher and mother it took him just two months to develop the app.

"The app is a quiz game with a question bank. After registration, it throws questions at the users with multiple choice answers. With each correct answer, the player earns points and crosses levels," explained Ayush. "When the teacher said that there are chances my friends would play it, I was more than motivated, because I always wanted to create something that my friends would recognise and like," added Ayush. He created the app with help from his mother Lakshmi Venkatachalam, a consulting professional, who learnt app development through video tutorials on YouTube, etc.

Lakshmi said, "Ayush was introduced to developing apps when he was in Std II and the school brought in these activities. Soon, he was hooked to them. We both learnt the process and created the first app which was about connecting cities to countries. He then started creating apps on his own. We finally came across the MIT App Inventor. It is the first time he has developed an app on this platform and won an award.

Padma Negi, principal of BHIS, Andheri, said, "As an avid Potter head, it delights me that this app can not only take me back to where it all began, but also test how big a fan I am. I am sure it is equally a treat for children in Std IV who are studying the novels."

Next Story : Mumbai: IIT-B stands all night in support of Shaheen Bagh