Too many problems but no government solution: Raj Thackeray 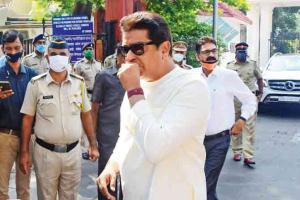 
Coming down heavily on the Uddhav Thackeray-led regime, Maharashtra Navnirman Sena (MNS) president Raj Thackeray has accused the MVA government of a policy paralysis that has left many problems without a solution. According to him, one such problem is a high electricity tariff that the companies are ready to reduce, but are waiting for the government to take a proactive step first.

"Everything is stalled. College admissions are stopped, temples haven't reopened. Suburban train issue is pending. Kunthat kunthat sarkar suru aahe (the government is not running smoothly). The government should tell the people at once what it will open, instead of being inconsistent in deciding things. There are so many issues but decisions are not taken," said Thackeray after meeting state governor Bhagat Singh Koshyari at Raj Bhavan on Thursday.

Thackeray said he wanted Koshyari to intervene in the matter. "He can tell the government, which is delaying the decision despite the companies saying that they were ready to reduce the tariff. The companies' officials have met me. The MERC (state regulator) has given me a letter saying it has no problem. Then why is the government not taking decisions?" asked Thackeray, adding that energy minister Nitin Raut had assured him of a decision as early as possible.

However, Koshyari advised Thackeray to take the matter to the Nationalist Congress Party (NCP) boss, Sharad Pawar. "I will discuss it with Pawar and even the CM. But they know the issue and yet nothing is decided. I think they should take a decision in the next three-four days," added Thackeray, who had written to the CM when consumers received exorbitant electricity bills for three lockdown months.

Revising the tariff for all four power supply companies in March this year, the MERC had reduced it considerably. Even the state government had hailed the reduction as its success.

However, the consumers are still enraged, because of the post-lockdown billing in July-August. The bills were higher and justified by the companies and MERC, which claimed that the consumption is always higher in the summers.

Sources said the easiest way to reduce the tariff was to offer the companies subsidy for the consumer category the government wants to give relief. The government was mulling extending benefits to the people who consume up to 200 units per month. But the state's weaker finances and a dip in revenue collection in the pandemic seem to have stalled the move.

There are other ways like how the Delhi government reduced the tariff, but that also involves considerable expenditure from the government. The government could also invoke a special provision in the Electricity Act to direct the companies to stop charging at the current MERC-approved tariff for certain periods, but then the companies cannot be stopped from recovering the dues or loss caused.