The Uddhav Thackeray led Shiv Sena (UBT) announced its alliance with Prakash Ambedkar-led Vanchit Bahujan Aghadi (VBA) for the upcoming BMC Elections. Sharing the stage with Prakash Ambedkar, Uddhav Thackeray said we have joined hands with (VBA) to keep the democracy alive. We have come together with the idea of `country first` and in a bid to keep democracy alive. Uddhav Thackeray criticized Modi’s visit to Mumbai. He said the BJP remembers the poor at the time of elections, later forget about their existence. Prakash Ambedkar and I are here today to form an alliance. My grandfather and Prakash Ambedkar`s grandfather were colleagues and they fought against the social issues at that time. Thackeray and Ambedkar have a history. Now their future generations are here to fight on the current issues of the country. Babasaheb Ambedkar`s grandson Prakash Ambedkar said the alliance marks the "beginning of new politics" in the country. Shiv Shakti and Bhim Shakti are coming together for a better future. None of us is leaving our religion behind but carrying forward the history our families share 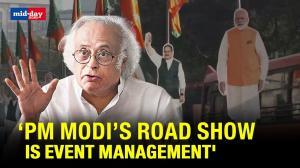