Eminent personalities who attended the meet, organised by Mayor Chanchala Kodre to analyse the recent riots in the city, believe that lack of leaders with mass appeal caused the situation to spiral out of control 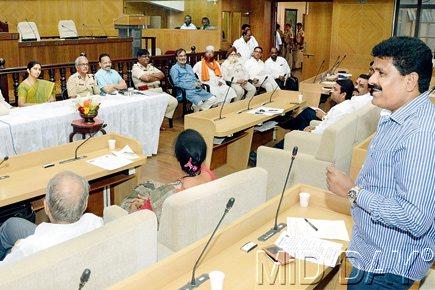 
Most of the prominent personalities who attended yesterday’s peace meeting at the PMC headquarters were of the opinion that the recent riots were a direct outcome of the ongoing leadership crisis in the city. Religious leaders from different communities, along with the police chief, attended the meeting that was organised by Mayor Chanchala Kodre.

Religious leaders from different communities, along with the police chief, attended the meeting that was organised by Mayor Chanchala Kodre at the PMC headquarters yesterday. Pic/Mohan Patil

Expertspeak
Social activist Kumar Saptarshi said, “In the past, leaders like S M Joshi would be the first ones to take to the streets to control the situation. He had commanded such respect that even rioters would run for cover the moment they spotted him. Unfortunately, during the recent riots, not a single politician or a leader made an attempt to control the violent mob. The youngsters, who went on a rampage, were just doing for the thrill. There was no fear of the police. The police have to pull up their socks to ensure that the scenario changes; quelling rumours that can snowball into violence is the a major challenge before the force.”

Senior academician S M Pathan said it was important to analyse the exact reasons behind the riots. “I would appeal to the Pune Muncipal Corporation to start a special academic wing, entrusted with the responsibility to study various social issues and hold regular meetings between people from different faiths,” he added.

RPI leader Parshuram Wadekar demanded that the PMC should bear medical expenses of riot victim Vasant Rupnawar, who was severely injured in one of the stone pelting incidents following news that objectionable material about Dr B R Ambedkar had gone viral.

Rupnawar sustained head injuries following which he slipped into coma. At present, he is undergoing treatment at a hospital in Solapur. Meanwhile, MNS corporator Rupali Patil claimed that the police had detained several innocent youth by framing riot charges against them.