Congress has no plans to protest against UP president's arrest

There was no anger palpable in the party ranks, exposing the deep division within the party, and no plans are underway to enlarge the scope of protests 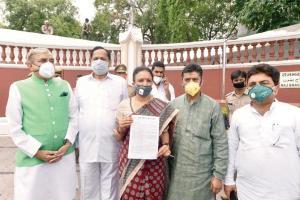 A Congress delegation after giving a memorandum to UP Governor regarding the arrest of UPCC President Ajay Kumar Lallu. Pic/PTI


The arrest of UP Congress President Ajay Kumar Lallu has failed to spur the Congress into action. The UPCC chief has been left out in the cold after his bail plea was rejected by the MP-MLA special court on Monday.

There was no anger palpable in the party ranks, exposing the deep division within the party, and no plans are underway to enlarge the scope of protests.

So far, the 'protests' on the issue have been restricted to wearing black ribbons, holding a candle march and organizing a 'havan' for the UPCC chief's release.

A party delegation also met Governor Anandiben Patel on Wednesday to seek her intervention in the matter.

UPCC media coordinator Lalan Kumar said on Wednesday that the party would now launch a major protest against the UPCC president's "unlawful" detention. "We will also appeal in the High Court for bail," he said.

However, there was no word whether any of the party's legal luminaries would take up Lallu's case.

Top party leaders have so far made a token contribution by tweeting in support of Lallu, but no agitation or protest plan has yet been formulated.

Priyanka Gandhi Vadra and Rahul Gandhi have also tweeted in support of the UPCC chief.

Lallu was arrested on May 21 for alleged forgery of documents of buses that his party had arranged for ferrying stranded migrant workers.

Rejecting the bail, special judge P.K. Rai said, "The offences are of serious in nature and adequate material has been collected against the applicant in the investigation. From the material prima facie, his complicity is apparent and as such at this stage, when the probe is still going on, there is no reason to release him on bail."

Interestingly, the communication on the bus controversy was mainly between Sandeep Singh, personal secretary to Priyanka Gandhi Vadra, and the state government. Lallu had written only one letter offering 1,000 buses to ferry migrants.

Sandeep Singh has neither been arrested nor questioned in the matter. Meanwhile, most senior leaders in the party have distanced themselves from the issue.

A former UPCC president said, "Since this Congress wants to focus on the youth and has no room for veterans, it is now up to the youth to fight for their president. We have already been relegated to the sidelines, so why should we take the lead and hold protests? In any other party, this issue would have mobilized the cadre and spurred the party into action."

Another senior leader said, "Ajay Kumar Lallu and his supporters have never shown even basic respect for senior leaders. They should realise that political parties are not a one-man show and if they are run like this, they will be reduced to a one-man party."

Congress Legislature Party (CLP) leader Aradhana Mishra said the party had full faith in the judiciary and that the party would soon launch a protest against the state government.