At moments like this, of political surrealism and bizarre events, it is worth turning to Robert Greene’s “The 48 Laws of Power” 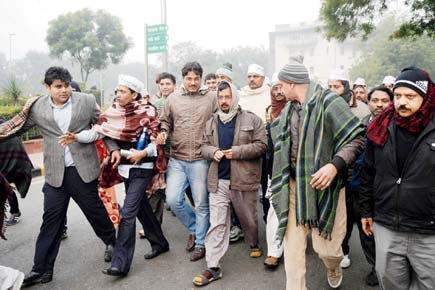 At moments like this, of political surrealism and bizarre events, it is worth turning to Robert Greene’s “The 48 Laws of Power”. Greene describes how politicians and leaders elsewhere in the world and, in history, had conducted themselves, either to attain power or having attained power, lost it.

Citizen King: Delhi CM Arvind Kejriwal walks with supporters towards a police barricade during his recent protest. One can clearly discern similarities with Louis Philippe Duke’s rule in France, with the present situation and dramatis personae in India. Pic/Afp

There is one story about the abdication of King Charles X of France following a revolution in July 1830, the selection of Louis Philippe Duke of Orleans to succeed him by the High Commission, and his fall. Events in our modern times in 21st century India seem to be drawing from 19th century France. Please do look for similarities.

It was apparent that Louis Philippe wanted to be a different king not just because he did not belong to the same dynasty, had not inherited the crown but also because he had been granted this title by a commission. But more than that, Louis Philippe disliked pomp and all the trappings of royalty. Unlike Napoleon, who had created an imperial system after the revolution, Louis Philippe wanted to downplay royalty. He wanted to be seen to be more egalitarian by mixing with businessmen and the middle class who had supported him. Not for him the spectre and crown as he walked the streets of Paris in his ordinary clothes and umbrella. When he invited James Rothschild, France’s most important banker home, to his palace and chummied with him, he spoke to him as an equal and talked business with him, something a king had never done before.

The reign of the bourgeois king plodded on, achieved very little, created confusion, attracted disappointment first and finally scorn from the people. They began to turn against him in a few years. Even radicals like Robespierre who had supported him and cheered him were turning against him. They were dissatisfied because the ruler acted neither like a king nor governed as a man of the people. The bankers soon realised that it was they who called the shots and began to hold the king in contempt to the extent that Rothschild even publicly reprimanded the king for being late.

Eventually by 1848, the same French who had brought down Charles X, were fed up and had begun to demonstrate against Louis Philippe. When the king tried to assuage sacked ministers with freebies, people sensed they could push the king to introduce true democratic reforms. The moment people threatened Louis Philippe, he surrendered to their wishes and demands. The people were looking for a ruler with a presence, clarity of vision and stature.

Overindulgence in modesty may not be the best way to power and good governance. Louis Philippe scoffed at symbolism, believing that when rulers acted as ordinary citizens a new world would dawn. He had forgotten the dynamics and realities of power. What was amusing to the people at first — the hat and the umbrella — soon became as source of irritation and inconvenience, and was suspected to be a trick to fool them.

When dynasties lose confidence, they and their courtiers take recourse to arrogance and distance, as we can see on our TV almost every other day, then change is upon us. Vulgarity and scorn as the route to power is successful sometimes but it is also short-lived, because it can be out done by greater vulgarity and scorn.

“Leaders who try to dissolve that distance through a false chumminess gradually lose the ability to inspire loyalty, fear or love. Instead they elicit contempt.... and the best they can do is simply vanish in the night, as if they were never there.” (Robert Greene). When Louis Philippe fled to England, the people elected Napoleon’s grand-nephew as president wanting to forget the bourgeois king.

One can clearly discern similarities in this story with the present situation and dramatis personae in India as we get ready for a change in political power. It took France 18 years to change around but that was before Internet, Twitter and FaceBook, before cell phones and TV. It could take much less time now for change and reaction. Is history going to repeat itself here — first as farce and then as tragedy?

Meanwhile, chose your own favourite with a hope and a prayer.