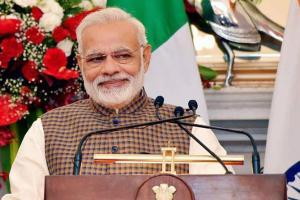 "October 31 also is the death anniversary of our former Prime Minister Indira Gandhi. Our respectful tributes to Indiraji," Modi said. Recalling Patel's contribution in uniting the nation, Modi said the leader ensured "the merger of all princely states with the Dominion of India".

"Patel formulated solutions one by one, weaving the warp and weft of unity on the axis of a single thread. He ensured the merger of all princely states with the Dominion of India. Whether Junagadh, Hyderabad, Travancore, or for that matter the princely states of Rajasthan. If we are able to see a united India now, it was entirely on account of the sagacity and strategic wisdom of Patel," Modi said.

The Prime Minister also announced the unveiling of the 'Statue of Unity' on October 31 in Gujarat's Narmada district as a tribute to Patel. "Erected on the banks of river Narmada in Gujarat, the structure is twice the height of the Statue of Liberty. This is the world's tallest skyscraping statue. Every Indian will now be proud to see the world's tallest statue here on Indian soil. Patel, a true son of the soil will adorn our skies too," he added.

Modi also linked Infantry Day -- observed in commemoration of the first victorious military action led by the Infantry in Jammu and Kashmir after Independence to drive out Pakistani invaders -- to Patel.

"We celebrated Infantry Day yesterday (Saturday)... This incident too is directly related to Patel. I was reading an old interview with the celebrated Army officer Sam Manekshaw. In that interview,Manekshaw was reminiscing the times when he was a Colonel. Around this time, military operations commenced in Kashmir.

"Field Marshal Manekshaw has mentioned how in a meeting, Patel was irked on the delay in sending troops to Kashmir. During the proceedings, Patel gave him a characteristic glance and reiterated that there should be no delay in our Army operation and that a solution should be sought swiftly. And immediately after that, our troops flew to Kashmira we've seen how our Army was successful," he said.

Next Story : Peace doesn't only mean 'no war'