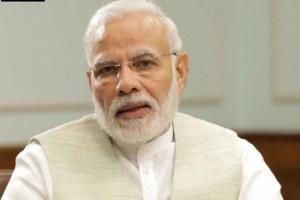 Narendra Modi during one of his interviews. Pic/ ANI


Prime Minister Narendra Modi will be addressing the nation at 8 pm on Thursday in what is known to be a bid to reach out to people of Kashmir after the measures taken by the Centre in Jammu and Kashmir, the Prime Minister’s Office informed in a tweet.

"Prime Minister Narendra Modi will be addressing the nation at 8 PM today," the PMO tweeted. Modi's address comes two days after the Parliament passed a resolution revoking the special status of Jammu and Kashmir under Article 370 of the Constitution and a Bill that reorganises the state into two union territories --Jammu and Kashmir, and Ladakh. The adoption of the resolution on Article 370 has also rendered Article 35A that defined permanent residents of the state invalid. The Prime Minister is expected to mention the issues related to Jammu and Kashmir in his address tonight.

While replying to the debates on the Bill, Home Minister Amit Shah had affirmed that Article 370 had been the biggest obstruction to the progress of people in Jammu and Kashmir and had boosted the growth of terrorism with help of Pakistan.

He had also said that the government was keen on making Jammu and Kashmir the most progressive region of the country and will talk to people of the state to clear any doubts. Shah also added that repealing  Article 370 will bring investment, create job opportunities and bring benefits of the laws that were not applicable to the state.

The government has also said that the state was being reorganised in order to curb terrorism and ensure better administration. Shah had informed the parliament that the government had no objection in making Jammu and Kashmir a state again on return of normalcy.