No power in the world can touch even an inch of Indias land," Singh said at a forward post in Ladakh located on the banks of the Pangong Tso lake 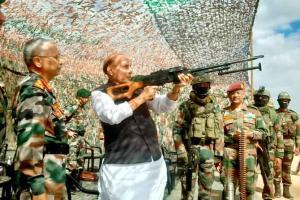 Defence Minister Rajnath Singh at a forward base in Ladakh, where he was accompanied by Chief of Defence Staff General Bipin Rawat and Army chief General Manoj Mukund Naravane (L) on Friday. Pic/ PTI


India is not a weak country and no power in the world can touch even an inch of its land, Defence Minister Rajnath Singh said on Friday as he visited Ladakh to carry out a comprehensive review of the security scenario in the wake of the border standoff with China. Addressing Army and ITBP jawans in Lukung, Singh said talks are underway to resolve the standoff in eastern Ladakh, "but to what extent it will be resolved I cannot guarantee".

"India is not a weak country. No power in the world can touch even an inch of India's land," Singh said at a forward post in Ladakh located on the banks of the Pangong Tso lake. "We will not allow the sacrifice of soldiers to go in vain," Singh said in an apparent reference to the killing of 20 Indian Army personnel during the Galwan Valley clashes with Chinese troops on June 15.

Catch up on all the latest Crime, National, International and Hatke news here. Also download the new mid- day Android and iOS apps to get latest updates.

Next Story : Robots deployed to serve COVID-19 patients in Vadodara based hospital