The government's next game changer could be to rename the country Hindustan, says our veteran columnist Aditya Sinha, and explains the reasons behind it and how it could play out 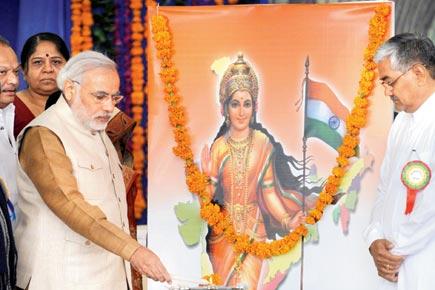 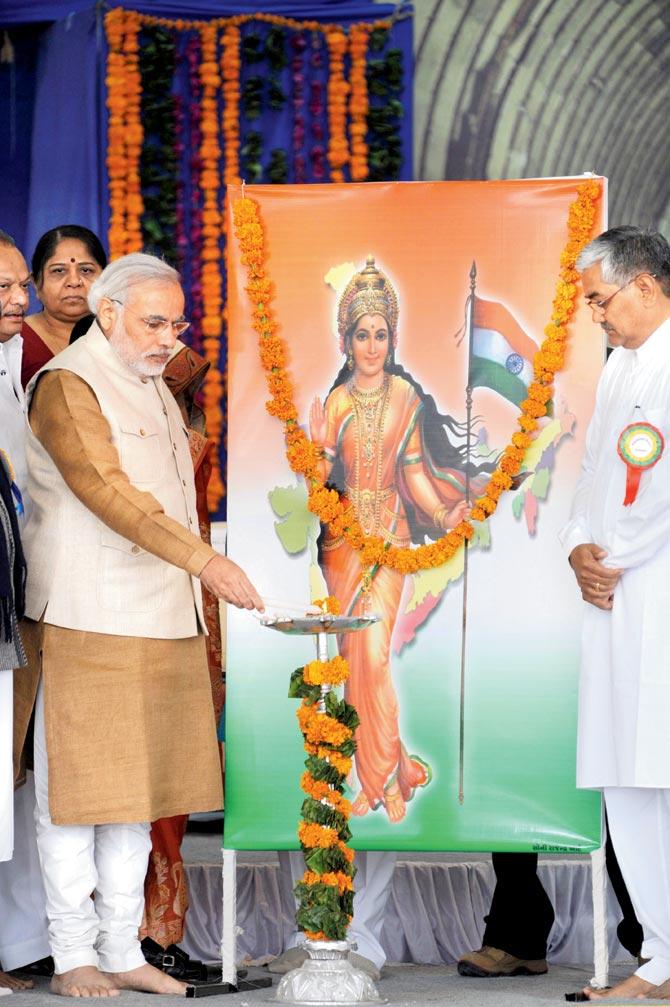 Like demonetisation, the new name will give many voters an illusory belief that Hindustan’s shackles are being broken. file Pic/AFP

Word is that Prime Minister Narendra Modi's people are working on yet another major, disruptive, "game-changing" initiative, one that also tops the Rashtriya Swayamsewak Sangh's (RSS) wishlist: changing the country's name to Hindustan.

This ambition was laid out in a 1921 tract by Hindu Mahasabha president Veer Savarkar, 'Essentials of Hindutva'. (Savarkar coined the term Hindutva. He remains a revered figure for the RSS and associated organisations, like the ruling BJP.) It is here that you first find the slogan, "Hindi, Hindu, Hindustan." Savarkar argued in his pamphlet about the Shakespearean poser "What's in a name?", in relation to what India ought to be called; his answer is the political realisation of the geographic. Pointing out that India was always known as the land of the Sindhus, (but that Persians and other foreigners had always pronounced the 'S' as a 'H'), Savarkar wanted the country to be once again thus identified. Implied, however, was that Hindustan meant Hindu + sthan, the place of Hindus. In either case, identifying it with the entire geography beyond the Indus river is also a step in the political realisation of Akhand Bharat. 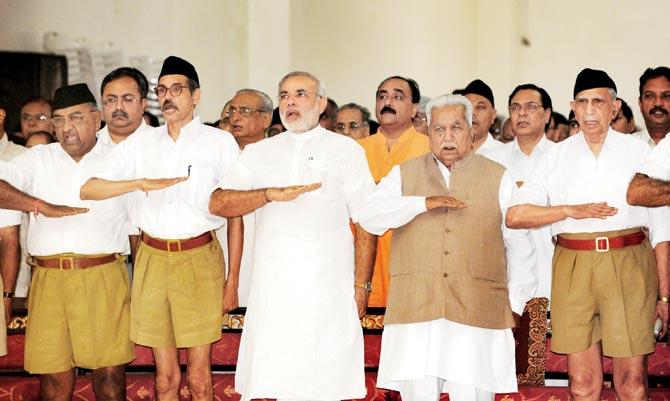 Narendra Modi at an Rashtriya Swayamsewak Sangh (RSS) gathering in 2009. Word is that his people are working on an initiative that tops the RSS wishlist - rechristening India as Hindustan. Pic/AFP

Hindutva also mentions that the Akhand Bharat project began with the Bharatvansh and culminated with Lord Rama's defeat of Lanka. This project thus dovetails with the Ayodhya project, the first part of which was the demolition of the Babri Masjid to, in the words of Hindutva, symbolise the political awakening of Hindus and to rectify the narrative imposed 800 years ago.

Changing the name of a country is no small thing. Unless it is a military dictatorship of a closed society like Burma, which changed its name to Myanmar, countries that have changed their names did so at their political birth. For example, Bangladesh, after gaining independence from Pakistan, and the countries formerly comprising Yugoslavia; or those countries discarding their colonial legacy like Zimbabwe (from 'Rhodesia') and Ghana (from 'Gold Coast'). India's name is itself a colonial legacy though most Indians don't object to it. On the other hand, only an insignificant number in Chennai or Mumbai still refer to Madras or Bombay; most accepted the change and continued with their lives.

For India, a democratic republic, to change its name would require a change in the Constitution, which incidentally is the 'Constitution of India', and which elucidates 'India, that is Bharat'. Obviously, a constitutional amendment would be required, which means obtaining not just a simple majority of Parliament but an absolute (two-thirds) majority. Also, the change would have to be ratified by two-thirds of the states. Of course, Modi is now in a strong position to do so and his government has demonstrated its ability to pass legislation, with the adoption of GST - a legislation the BJP obstructed while in Opposition.

Then there is the timing. At the moment Modi and team seem invincible. They won the UP Assembly election with an absolute majority that even BJP president Amit Shah might not have anticipated. Their unofficial mouthpiece, the new TV news channel 'Republic' is beating the pants off the rest of the TV news channels in ratings. The Opposition looks too frightened to raise any issue, as some leaders fear they will be thrown in jail. Look at how long it is taking them to propose a joint candidate for next month's presidential election; many seem resigned to the fact of Modi's candidate's victory.

(Incidentally, the silence of Opposition leaders means that the media, as emasculated as it has become, has had to take on their job. This has only harmed the credibility of the media.)

The BJP is in utter control of the country's narrative. Despite the failure of demonetisation - official statistics show that it drove the GDP down for the last quarter of financial year 2016-17 by as much as two points, as had been predicted by former PM Manmohan Singh - it remains in many Indians eyes a sign of the PM's toughness and willingness to take harsh steps to fix things. Poorer voters think Modi stuck it to the rich, even though the black money recovered was peanuts. The rich were least discomfited by demonetisation. (Indeed, they are awaiting the garage sale of Air India.) On Kashmir, the middle-class voter seems to approve repression over political engagement; on Pakistan, it approves dubious surgical strikes over diplomacy. Nuance has been demolished, dissent has been crushed.

No wonder there is confidence about moving forward on the game-changing name-change. Yet, if it happens, then, like demonetisation, it will change nothing substantive in our lives. It will only give many voters an illusory belief that Hindustan's shackles are being broken: Hindustan unbound. Unless it provides a rallying point for the Opposition. It would be interesting to see a national debate that centres on the Shakespearean query, "What's in a name?"

Aditya Sinha crime novel, The CEO Who Lost His Head, is out later this month. He tweets @autumnshade. Send your feedback to mailbag@mid-day.com

Next Story : Man nabbed from Pune in a 'cash for transfer' case