Priyanka Wadra was ready to work under non-Gandhi chief 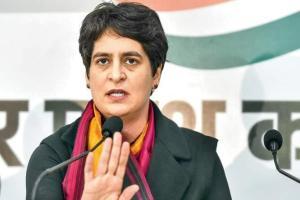 
Congress General Secretary Priyanka Gandhi Vadra was ready to work under a non-Gandhi president after Rahul Gandhi's resignation following the defeat in the General Election in 2019. Rahul Gandhi also had said that the party should elect a president outside the family, but in August last year Sonia Gandhi was appointed the interim president of the Congress. The claim has been made in a book -- 'India Tomorrow: Conversations with the Next Generation of Political Leaders' written by Pradeep Chibber and Harsh Shah. Priyanka, in the book, was quoted as saying: "If there were to be another party President, he would be my boss". "If he tells me tomorrow that he doesn't want me in Uttar Pradesh but wants me to be in Andaman and Nicobar (Islands), then I would jolly well go to Andaman and Nicobar."

While the book claimed that Priyanka Gandhi during her interview said that she fully is in consent with Rahul Gandhi when he says a non-Gandhi should be appointed the Congress president. "I think that the party should find its own path also," Priyanka said. After Sonia Gandhi completed a year, there is a demand in the party that there should be election for the Congress Working Committee (CWC) and a permanent party head be appointed.

However, sources in the party said that this interview was given last year just after Rahul Gandhi had resigned but the situation is different now. Sacked party spokesperson Sanjay Jha had claimed: "It is estimated that around 100 Congress leaders (including MPs), distressed at the state of affairs within the party, have written a letter to Sonia Gandhi, the Congress President, asking for a change in political leadership and transparent elections in the CWC." The party, however, has denied the existence of such a letter or having received it.

The Congress on August 11 had hinted that Rahul Gandhi may not be reluctant to take over as the party president in the near future even as it credited him with resolving the Rajasthan crisis.

Responding to a question during a virtual press conference, Congress chief spokesperson Randeep Surjewala, when reminded that Rahul Gandhi had refused to take the post in the past, replied: "I don't think either I or you or any of us have recently spoken to him (Rahul Gandhi) on the issue." He insisted that the reason for Rahul's resignation last year was on "moral grounds", taking responsibility for the party's defeat in the General Election.

"I don't want to comment on the future, I am certain good things will happen," added Surjewala, hinting that Rahul is not reluctant to take over as the party president. The Congress leader said that all the Congress workers want Rahul Gandhi as head of the party not because he is Rahul Gandhi, but for the way he has shown "courage" to take on the Modi government. The clamour to bring back Rahul Gandhi has become louder after the issue was raised by the Lok Sabha and Rajya Sabha MPs in July when Sonia Gandhi as interim party chief completed one year in office.

The Congress also gave full credit to Rahul Gandhi for the resolution of the Rajasthan turmoil. The party underlined that it was his ability to bring together opposing Congress factions.

Next Story : After SC order, CBI to seek all evidence, gadgets from Mumbai cops