Ankita Bhandari murder case: She was killed for refusing to have sex with the guests, says police 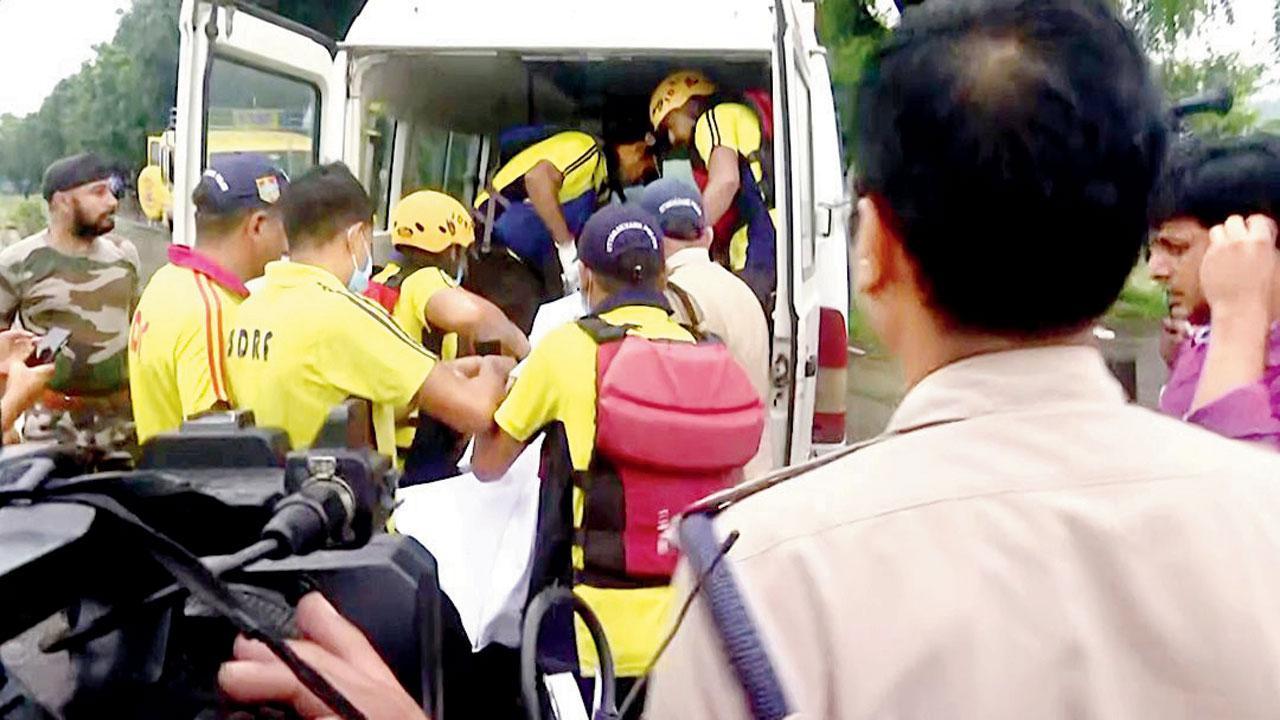 SDRF and police personnel moving the victim’s body to an ambulance after recovering it from a canal. Pic/PTI


The body of Ankita Bhandari who worked in an Uttarakhand resort was recovered from a canal on Saturday, police said. The ruling BJP swung into action to expel its leader whose son, the main accused, owned the property.

Outrage over the killing of the 19-year-old, who worked as a receptionist in the Vanantara resort in Pauri district, owned by Haridwar BJP leader Vinod Arya’s son Pulkit Arya, escalated as details emerged of her trauma in the days preceding her death.

Violent protests erupted in areas surrounding the resort with locals breaking glass panes and some trying to torch a pickle factory in its premises. However, the fire did not spread much as the weather was cloudy.

BJP’s Yamkeshwar MLA Renu Bisht’s car was also attacked near the Cheela canal close to Rishikesh. It was the same area from where the young woman’s body was recovered, six days after her parents found her missing from her room. However, the crowds, seething with anger, succeeded only in breaking the rear windscreen of Bisht’s car and she was escorted to safety by police personnel.

Bhandari had been under pressure from Pulkit Arya, who was arrested on Friday along with resort manager Saurabh Bhaskar and assistant manager Ankit Gupta and sent to 14 days judicial custody, to provide “special services” to guests, Director General of Police Ashok Kumar said.

This had been gleaned from her chat with a friend, he said. Earlier in the day, Bhandari’s Facebook friend reportedly alleged that she was killed because she refused to have sex with guests as demanded by the owner of the resort.

As the ripples of anger spread, Chief Minister Pushkar Singh Dhami promised that no one would be spared and that a Special Investigation Team headed by Deputy Inspector General P Renuka Devi had been constituted to probe all aspects. “Demolition of the resort owned by the main accused is underway. Some of its rooms have also been sealed so that evidence is not destroyed,” he added.

The autopsy is being done at the All India Institute of Medical Sciences, Rishikesh, police said. According to Pauri Additional SP Shekhar Chandra Suyal, Ankita was found missing by her parents on September 19 and they reported it day later. The accused initially tried to mislead the police, but confessed later.

Outrage in Rishikesh grew over the alleged killing of Ankita Bhandari with people setting a factory of the prime accused on fire on Saturday. Ever since the recovery of Ankita’s body on Saturday morning, people are demanding the death sentence for the accused. The protesters had vandalised Pulkit’s resort. On the direction of Chief Minister Pushkar Singh Dhami, the resort has been razed to the ground. A mob at AIIMS, Rishikesh, also vandalised Yamkeshwar MLA Renu Bisht’s car. Sensing the situation to be grim, Renu Bisht left the city. The prime accused in the case is Pulkit Arya, son of former state minister Vinod Arya. The BJP has expelled Vinod Arya and Pulkit’s brother Ankit Arya.

The Congress on Saturday termed BJP’s decision to expel Vinod Arya and his son from the party as “selective action” and said it should remove all its lawmakers who are facing charges of crimes against women. At a press conference, party’s spokesperson Supriya Shrinate said that when Prime Minister Modi speaks from the ramparts of the Red Fort, he should think as to why BJP leaders are involved in such crimes against women. “Narendra Modi must apologise,” she added.

Next Story : Durga pandals in Kolkata to have Braille display board