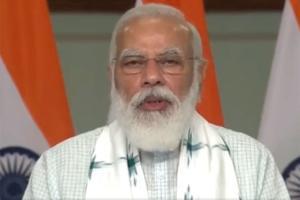 
Prime Minister Narendra Modi made an unscheduled address to the captains of the Indian defence industry to assure them that Atmanirbhar Bharat (Self-reliant India) is not an inward looking idea but is for a stable global order.

"Atmanirbhar Bharat will make the global economy resilient, stable, and will work towards world peace. India has potential to be a supplier of defence equipment to friendly countries. India will be a net security provider in IOR (Indian Ocean Region," Modi said.

Prime Minister #NarendraModi (@narendramodi) made an unscheduled address to the captains of the Indian defence industry to assure them that #AtmanirbharBharat (Self-reliant India) is not an inward-looking idea but is for a stable global order. pic.twitter.com/aH3tghcyoS

He was addressing all defence stakeholders during a webinar organised by the Federation of Indian Chambers of Commerce and Industry (FICCI), jointly with the Department of Military Affairs (DMA), Ministry of Defence on 'Atmanirbhar Bharat - Defence Industry Outreach Webinar'.

He also addressed the concerns of foreign investors in India. "For long, FDI was not allowed in the defence sector. Our government came and made changes. For the first time, 74 percent of FDI has been allowed. We have opened the doors. For decades, ordnance factories were running without focus and the country was incurring loss. The echo system was limited. We are now corporatising ordnance factories."

Modi said that the government is committed to Make in India a success and make India an export hub. "Our government has taken several reform measures like a bankruptcy code, ease of business etc... Ending red tapism and spreading red carpet is our motto," Modi said.

Modi said, "India for ages has been a big importer of defence equipment. India has potential however it is very far away from other countries in defence production. Unfortunately, earlier India never focused on this sector."

The prime minister said that the earlier government never took defence production seriously and treated it as a routine subject.

He said, "In the last few years, we have been making all attempts to boost manufacturing in this sector and promoting private sector participation...We have taken various reform measures and it will continue.."

"Procurements after creation of Chief of Defence Staff have been streamlined," the Prime Minister emphasised.

He pointed out that India's foreign partners will prefer production of products in India as a better eco system is being provided to them.