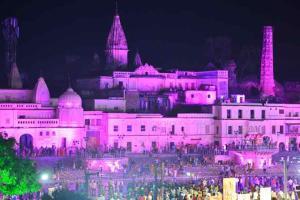 Hindu devotees gather whiel lighting earthen lamps on the banks of the River Sarayu on the eve before the groundbreaking ceremony of the proposed Ram Temple in Ayodhya. Pic/ AFP


Ayodhya will witness another chapter in its history with bhoomi pujan for a grand Ram temple on Wednesday and the day has come after an end last year to a long and arduous legal struggle that stretched 134 years.  Perhaps the longest title dispute in the country, it began in 1885 and ended with Supreme Court giving its verdict in November last year. That also paved the way for the constitution of Shri Ram Janmabhoomi Teerth Kshetra trust which has been tasked to oversee the construction of temple. The first suit in the Ayodhya title dispute was filed in January 1885, by Mahant Raghubar Das before the Sub-Judge, Faizabad. Das said he was Mahant of 'Ram Janmasthan' .

Petitions continued to be filed over the years and in 1949 an idol of Lord Ram, Goddess Sita was found inside the mosque. Two suits were filed in a Faizabad court in 1950 for permission to worship the idols at the place and in 1959 Nirmohi Akhara filed a suit seeking possession of the site. In 1981, Uttar Pradesh Sunni Central Waqf Board filed suit for possession of the site and removal of idols and five years later a local court ordered the opening of the site and allowed Hindus to offer prayers.

The legal tussle then reached Allahabad High Court and it ordered status quo on the site in 1989. The court subsequently transferred these suits, along with a separate suit by Hindu worshippers, to itself for trial. After hearing the matter for a period of around eight years, the Allahabad High Court, which began hearing the matter related to determining who owns the disputed site in 2002, gave its judgment on September 30, 2010.

It ordered trifurcation of the 2.77-acre disputed land between UP Sunni Waqf Board, the Nirmohi Akhara and Ram Lalla Virajman, which was stayed by the Supreme Court the next year when pleas challenging the High Court order was filed before the apex court.

The Supreme Court in its order on November 9, 2019, directed the central government to hand over the 2.77 acres of disputed land to a trust, set up for the construction and management of a Ram temple.

A five-judge Constitution bench presided by the then Chief Justice of India Ranjan Gogoi had also directed that a suitable plot of land admeasuring five acres be handed over to the Sunni Central Waqf Board granting it the liberty to construct a mosque at the alternate site. "The facts, evidence and oral arguments of the present case have traversed the realms of history, archaeology, religion and the law. The law must stand apart from political contestations over history, ideology and religion," the apex court had observed in its verdict.

It had said that the Constitution does not make a distinction between the faith and belief of one religion and another and added that all forms of belief, worship and prayer are equal.

"On the balance of probabilities, there is clear evidence to indicate that the worship by the Hindus in the outer courtyard continued unimpeded in spite of the setting up of a grill-brick wall in 1857. Their possession of the outer courtyard stands established together with the incidents attaching to their control over it," the order had said.

The bench had also held that there is evidence on a preponderance of probabilities to establish worship by the Hindus prior to the annexation of Oudh by the British in 1857 in the inner courtyard.