Devdutt Pattanaik: From a name to an opinion

A great way to engage in conversation with people is to ask them for the meaning of their name. For Indian names, at least, decoding these proper nouns unfolds a world of mythology and history and literature 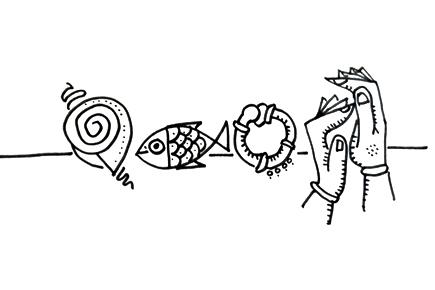 A great way to engage in conversation with people is to ask them for the meaning of their name. For Indian names, at least, decoding these proper nouns unfolds a world of mythology and history and literature.

Take my name, for example. Devdutt. As a common noun, it means the 'gift of God'. If 'dutt' was written as 'doot', then it would be 'messenger of God'. In Buddhist mythology, it refers to Gautama Buddha's antagonist, Devdutt. In Hindu mythology, it refers to Arjuna's conch-shell, one that he finally blows to declare war, after being enlightened by the Gita discourse of Krishna. My mother, who named me, had no clue that in Maharashtra people worship Datta, a sage-deity, an amalgamation of the Hindu trinity, a teacher of teachers, of the Nath parampara. So, Devdutt can also refer to him. A Tamil friend told me that he had heard Narada's lute is named Devdutt.

Now, let's turn to the three other opinion-makers of this Sunday Mid-day section: Meenakshi, Rahul and Paromita.

Meenakshi means one whose eyes are shaped like a fish. Not the round eye of a fish, but tapering contours of a fish, the typical Indian Jamini Roy type of almond eyes, which exists in many variations, according to poets, like the bud of a lotus (Padmakshi), or the eyes of a deer (Mriganayani). As a proper noun, it refers to the goddess-queen of Madurai, who rode north in search of a husband and found her match in the handsome Somasundara Shiva of Kailas. She transforms the hermit into a householder and brings him to her palace-temple and every night in a grand ceremony he comes to her and they spend the night on a swing in a room full of mirrors, filled with the heady scent of jasmine flowers.

Rahul is how Gautama of the Sakya clan addressed his newborn son. In Prakrit, it means fetter, the one who binds you. For Gautama saw his son as the responsibility that would stop him from going into the forest in search of the truth. Others say, Rahul means 'the enabler', for the newborn's tears convinced Gautama that the sorrows of the world need to be understood, addressed and overcome. For which he had to abandon his family and go to the forest, and eventually become the Buddha, the one who is aware and awake, to the cause of all misery.

Like Rahul, Paromita's name comes from the Buddhist tradition, probably the Pala Buddhism from medieval Bengal considering the stress on 'o'. Derived from the other (para) and beyond (paar) and infinite (param), it refers to the one who takes you beyond the self to the other, gives you access to the other side, and leads you toward infinity, towards completeness and perfection. It is the name of Tara who introduces feminine compassion (karuna) into Buddhism, and so completes the otherwise masculine doctrine of detached wisdom (pragnya). She transforms the hermit's solitary path of self-realisation, which borders on self-obsession, and makes him care for the rest. She is therefore linked to Saraswati, goddess of knowledge.

You wonder if embedded in your name is a secret desire of your parents, or a seed of ancestral wisdom, a thought, not just a label to identify you from others. You sit back and look at your life and wonder if you have lived up to your name, and whatever meaning you choose to give it.

Next Story : Meenakshi Shedde: Leap into the light