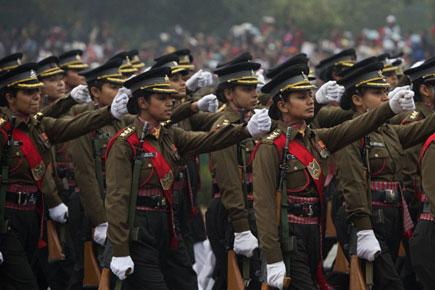 New Delhi: Multi-hued images of India's rich cultural diversity and military might as well as achievements in diverse fields unfolded today at the 66th Republic Day parade which had US President Barack Obama as the Chief Guest for the first time.

As the nearly two-hour-long parade, showcasing the country's 'unity in diversity' marched down the Rajpath in drizzle and overcast skies, thousands of spectators gathered along the route and cheered in joy. 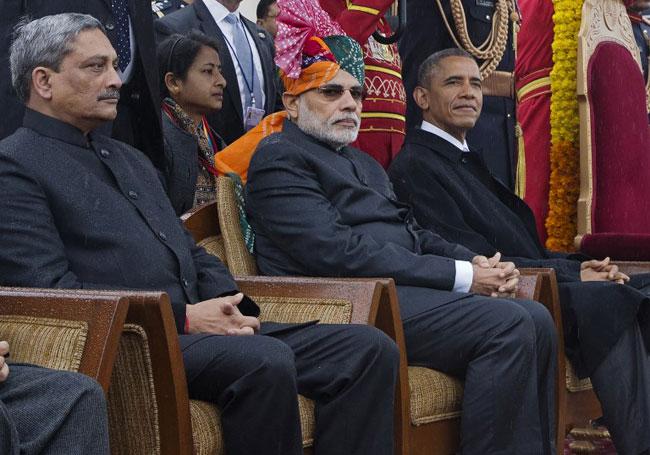 The national capital was wrapped in unprecedented security blanket as thousands of security personnel kept a hawk's vigil in and around the Rajpath area.

Obama was seated next to Modi, donning a multicoloured 'bandhej safa' (turban), as the two leaders chatted and enjoyed the annual spectacle. A smiling US President was seen nodding in appreciation on several occasions.

In a departure from tradition for the Chief Guest at the Republic Day parade, Obama arrived in his own highly-secured bomb-proof vehicle, 'The Beast,' at Rajpath.

A highlight of this year's parade was the display for the first time of the recently acquired long-range maritime surveillance and anti-submarine P-8I aircraft and the long-range advanced MiG-29K fighter plane.

The synchronised military and police contingents led by General Officer Commanding (Delhi), Lt General Subroto Mitra marched proudly to the lilting tunes of bands through Rajpath where President and Supreme Commander of the Armed Forces Pranab Mukherjee took the salute from a specially erected dais. 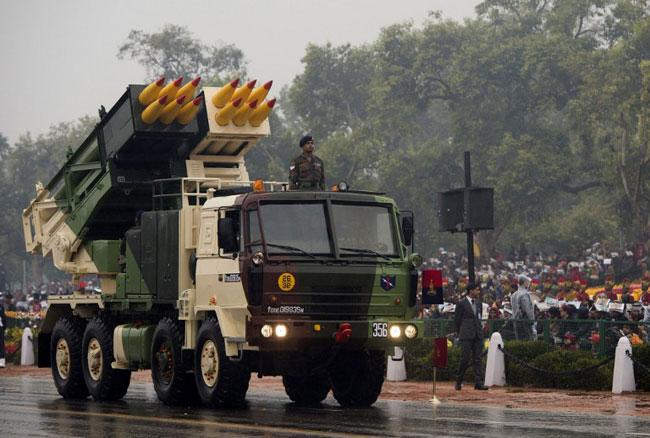 Minutes before the parade began, the Prime Minister, Defence Minister Manohar Parrikar and chiefs of Army, Navy and Air Force laid wreaths at 'Amar Jawan Jyoti', the war memorial at the India Gate where an eternal flame burns in memory of those who laid down their lives defending the frontiers of the nation.

A massive ground-to-air security apparatus was put in place in the national capital turning the city into virtually an impregnable fortress. Snipers of National Security Guard were deployed at all high-rises along the parade route. The arrangements were made to ensure an incident-free Republic Day celebrations and foolproof security to the American President, who arrived here yesterday.

As part of the seven-layered security, around 45,000 security personnel were deployed across the city while the commandos of the Indo-Tibetan Border Police and Delhi Police kept a hawk-eye vigil at important locations.

The unfurling of the tricolour by the President and playing of the national anthem were followed by a customary 21-gun salute. The parade began shortly after Mukherjee and Obama arrived at the saluting base separately at the ceremonial boulevard--Rajpath. Traditionally, the President accompanies the Chief Guest in his limousine.

Before the commencement of the parade, Naik Neeraj Kumar Singh and Major Mukund Varadarajan were posthumously conferred the highest peacetime gallantry award Ashok Chakra by the President. Major Varadarajan and Naik Neeraj Kumar laid down their lives while battling groups of militants in separate operations in Shopian and Kupwara districts of Kashmir respectively.

Among the main attractions of the ceremonial parade were 25 colourful tableaux representing India's cultural and linguistic diversity as also signifying the vision of the future India as envisaged by the current dispensation.

So, a massive mechanised lion made out of gear-tooth wheels, symbolic of the government's 'Make in India' policy or a mock-up of a high-speed bullet train drew cheers from the crowd as they rolled down the majestic avenue. 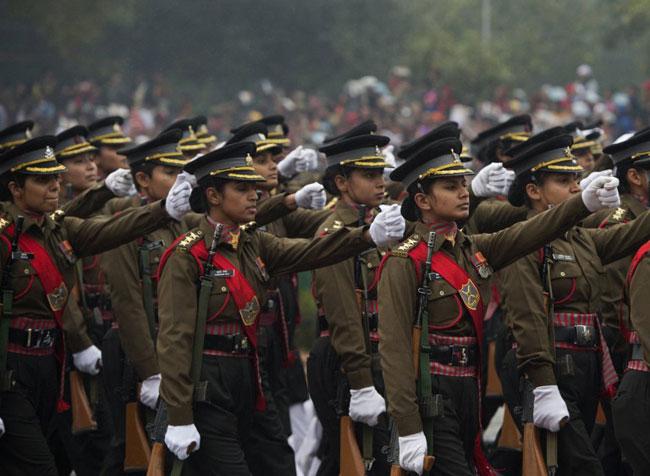 Besides, the tableaux for 'Prime Minister Jan Dhan Yojana' helmed by the Department of Financial Services, the Ministry of Women and Child Development-led exhibit featuring live performances by women themed on 'Beti Bachaho, Beti Padhao' campaign also won many hearts. And, with "Women's Empowerment" being the theme of this year's Republic Day parade, another attraction at the annual extravaganza was the contingents of all-women officers of the three Services marching for the first time on the Rajpath.

While 16 of the tableaux belonging to the states and the union territories represented the cultural and architectural wealth of the country, the remaining nine were from various central ministries and departments themed on 'Ma Ganga' to 'Yoga' among others.

Colurful performances by schoolchildren delighted President Obama as much as the crowd in general. Another military attraction was the display of Army version of indigenously developed surface-to-air Akash medium range missile and Weapon Locating Radar, both by Defence Research and Development Organisation (DRDO).

An Indian Air Force tableau with the theme "50 years of 1965 War" was next in line at the majestic Rajpath, dazzling VIPs, VVIPs and spectators alike.