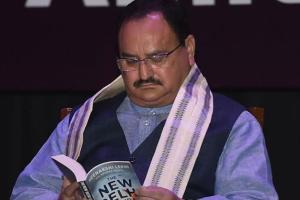 
Slamming the Maha Vikas Aghadi (MVA) government in Maharashtra as "an unholy alliance", Bharatiya Janata Party (BJP) president J.P. Nadda urged the state unit to ensure that it doesn't need the support of anyone else for the next elections.

"The government is an unholy alliance (of Shiv Sena-Nationalist Congress Party-Congress), it is shameless and works for profit. We need to ensure that we do not need anyone and should go alone in the next elections," Nadda said while addressing the Maharashtra BJP office-bearers through a video-conference.

Nadda's statements assume significance amid political speculation that the Sena may plunge into the next elections in the state in partnership with the MVA, which was formed in November 2019.

Attacking the MVA, the BJP chief said the government of Chief Minister Uddhav Thackeray and his ministers "have failed in handling the Covid-19 crisis" in the state.

"The (state) government is facing inter-party issues and intra-party problems. However, the leader of the Opposition Devendra Fadnavis has provided an effective opposition and exposed the ruling dispensation," said Nadda.

He also urged the state BJP President Chandrakant Patil to ensure that the IT cell in the state is further strengthened. "You have to make it stronger and aggressively use the WhatsApp groups and virtual meetings need to be enhanced, and yet the party must remain galvanised at the grassroots level," exhorted the party supremo.

Others who addressed the virtual conference included Patil, Fadnavis, senior leaders and party office-bearers from the state.

Next Story : First 5 Rafale fighters from France arriving in New Delhi on Wednesday