Among other things, Hilal has also been associated with the weaponisation of the Rafale aircraft for acclimatisation to Indian requirements. 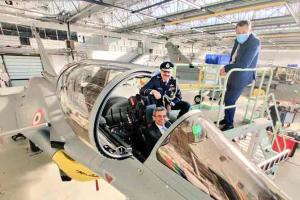 
Air commodore Hilal Ahmad Rather has become a buzz name in Kashmir overnight. Hilal saw off the first batch of Rafale jets which took off from France to India on Monday. Among other things, he has also been associated with the weaponisation of the Rafale aircraft for acclimatisation to Indian requirements.

Hilal is presently India's Air Attache in France. The career details of this officer of the Indian Air Force (IAF) read like the decoration scroll of the best flying officer anywhere in the world.

He has three sisters and is the only son of his parents.

Hilal studied in Sainik School in Nagrota town of Jammu district. He was commissioned in IAF as a fighter pilot on December 17, 1988. He became flight lieutenant in 1993, wing commander in 2004, group captain in 2016 and air commodore in 2019.

He graduated from defence services staff college (DSSC). He also graduated from air war college (USA) with distinction. He won the sword of honour in NDA. Hilal is the recipient of Vayu Sena Medal and Vishisht Seva medal.

With an impeccable record of 3,000 accident-free flying hours on mirage-2000, MIG-21 and Kiran aircraft, Hilal's name will now forever be associated with Rafale in India.

Next Story : Techie sells vegetables to support her family, Sonu Sood helps her