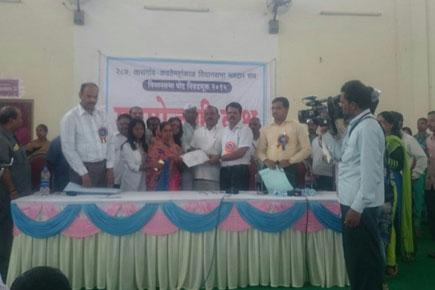 Suman has received more than 1.31 lakh votes and have paved her victory against nine other odd candidates in her constituency. The by-poll was necessary following the death of R R Patil due to prolong illness on February 16.

50-year-old homemaker Suman, never came into public domain until her husband’s death. NCP had decided to field her name to contest in by-poll against nine other odds members including BJP rebel and independent candidate Advocate Swapnil Patil. The counting began at Tasgaon based Main administrative building at 8 am onwards on Wednesday.

Suman lead with the highest margin of 1,12,963 votes which rooted her victory.

Suman Patil pays tribute to a soldier. She is accompanied by her daughter Smita Patil (right)

There were 21 rounds in total and right from the first round, Suman was leading with highest margin and she was finally declared as the winner in the last round. Suman received 1,31,236 while rebel BJP candidate Swapnil Patil received total 18,273 votes. About 1,495 voters in the constituency preferred to press None of the above option (NOTA).

Speaking to Mid-day, Election officer Hemant Nikam said, “Suman Patil has won the election while nine other aspirant candidates deposits during contesting election will be seized. Around 8 am the counting began and everything was conducted in a peaceful manner. Around 11.30 am the final results were announced.”

During counting, Suman was seated at her home near her husband photograph and kept mum. After her victory was announced, she could not control her emotions and walked out of her house to collect the certificate from the election officer along with her elder daughter Smita Patil.

RR Patil who died due to prolonged illness in Mumbai based hospital on February 16. In October, 2014, R R Patil had won the Tasgaon-Kavathe Mahankal assembly seat for the sixth time in a row. He defeated former NCP leader Ajit Ghorpade, who contested on the BJP's ticket, by 22,410 votes.