A video of the moment was shared by Ratan Tata in his Instagram stories, in which he wrote, u00e2u0080u009c It was an honour to awarded by the TIEcon at the hands of a great friend Mr Narayana Murthy.u00e2u0080u009c 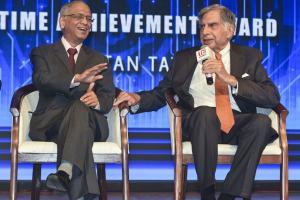 
Infosys co-founder NR Narayana Murthy has been trending on Twitter after pictures of him touching industrialist Ratan Tata's feet has been making rounds on social media. The two corporate honchos shared the stage at the TIEcon event in Mumbai on Tuesday while Murthy was presenting Tata with the Lifetime Achievement Award.

Murthy then bent down to touch the feet of the chairman emeritus of Tata Sons, as a sign of respect. A video of the moment was shared by Tata in his Instagram stories, in which he wrote, “ It was an honour to be awarded by the TIEcon at the hands of a great friend Mr Narayana Murthy.“

The moment was also shared by the organisers of the event and called the moment ‘historic’ and the gesture by Murthy ‘touching'.

The Twitterati also hailed the moment and praised the Infosys co-founder for his gesture.

According to a PTI report, Murthy, in the event, advised the aspiring entrepreneurs to create enterprises with the highest standards of integrity, ethics and honesty. Assisted technology will help human beings by making them more productive.

Next Story : Baby with critical congenital lung condition gets a new lease of life