Lauding the women of the country Modi said, the way they have furthered the message of cleanliness is commendable 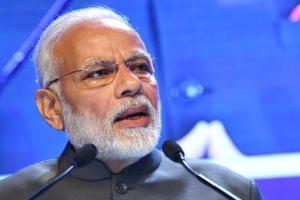 
Prime Minister Narendra Modi on Saturday said that the contribution of India's 'Nari Shakti' (women power) in the Swachh Bharat Mission was immense.

"The contribution of India's Nari Shakti (women power) in the Swachh Bharat (clean India) Mission is immense," Modi said while launching the 'Swachhata Hi Seva Movement'. "Youngsters are ambassadors of social change. The way they have furthered the message of cleanliness is commendable. The youth are at the forefront of a positive change in India," Modi said while interacting with the students of Assam via his NaMo App.

Modi also said that till October 2, which is Gandhi Jayanti, "let us rededicate ourselves towards fulfilling Bapu's dream of a Clean India". Highlighting the success of the clean India mission, Modi said: "The Swachata coverage is now above 90 percent which used to be 40 percent four years ago. This happened in just four years.

"The credit for the success of Swachhata Abhiyan goes to the people of this nation and not the government alone," he said, adding that over nine crore toilets have been built in last four years and over 4.5 lakh villages have been declared as open defecation free.

"Did anyone thought four years ago that over 20 states and union territories would become ODF? This is the power of the people of India." Modi also stressed that only building toilets India won't become clean.

"Cleanliness is a habit in which one has to indulge himself every day and change in behaviour is also required," he said.