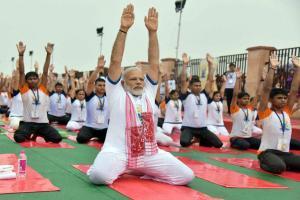 Narendra Modi during a yoga session


Prime Minister Narendra Modi today posted his fitness video on Twitter which shows him meditating, walking on a track inspired by five elements of nature, and doing yoga exercises.

I am delighted to nominate the following for the #FitnessChallenge:

India’s pride and among the highest medal winners for India in the 2018 CWG, @manikabatra_TT.

The entire fraternity of brave IPS officers, especially those above 40.

The prime minister's one-and-a-half minute video comes nearly a month after he accepted the fitness challenge thrown by Indian cricket team skipper Virat Kohli. Modi had then replied on Twitter that he will soon upload his fitness video. 'Challenge accepted, Virat! I will be sharing my own #FitnessChallenge video soon,¿ the PM had written in May in reply to Kohli's challenge.

While posting the video this morning, Modi said, "Apart from Yoga, I walk on a track inspired by the Panchtatvas or 5 elements of nature - Prithvi, Jal, Agni, Vayu, Aakash. This is extremely refreshing and rejuvenating. I also practice breathing exercises."Wearing a black jogging dress, Modi is seen walking on a track created around a tree, doing stretching exercise and sitting on a rock for meditation.

He is also seen balancing himself while walking on a narrow, circular track.