Lawyer Vishnu Jain said he would go to the civil court to seek its protection. An advocate from the Hindu side, Madan Mohan Yadav, claimed that the shivling is Nandi faced 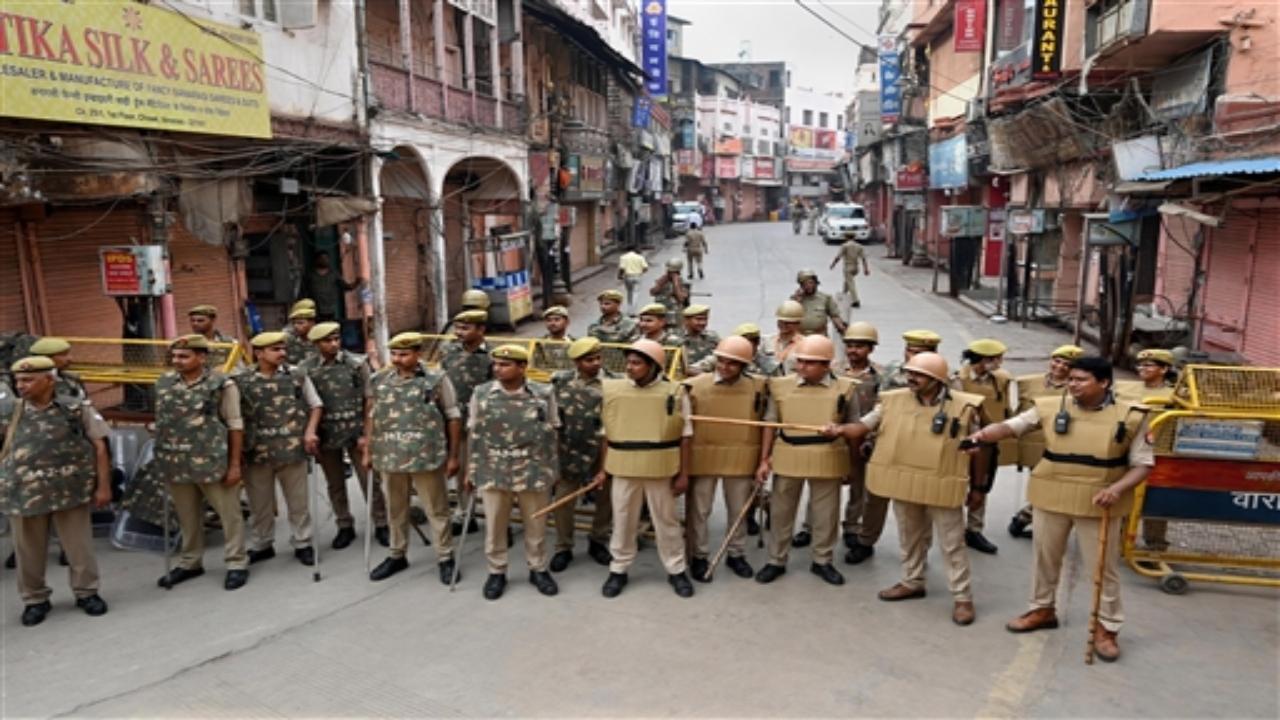 Policemen stand guard during the third and last day of a videographic survey at Gyanvapi Mosque complex, in Varanasi. Pic/PTI


As the third day of the court-ordered videography survey of the Kashi Vishwanath Temple-Gyanvapi Mosque complex in Varanasi concluded on Monday, the Hindu petitioner in the case, Sohan Lal Arya claimed that the committee found a Shivling at the complex.

Arya, who accompanied the court commission for the mosque survey, said that they have found a "conclusive evidence".

The survey was conducted in accordance with the Varanasi Civil Court's order to continue the survey despite objections from the mosque authorities.

In its order, the court said that the DM, police commissioner and the Central Reserve Police Force (CRPF) commandant Varanasi will be responsible for the security of the sealed area.

Five women had filed a petition in the court seeking permission for daily worship at the Shringar Gauri temple, which is claimed to be situated inside the Gyanvapi Mosque premises.

The order of the civil court for undertaking survey and videography at the premises was subsequently given by the court.

Another petition, which was filed by one Vijay Shankar Rastogi, had contended that the entire premises belonged to the Kashi Vishwanath Temple and that the Gyanvapi Mosque is only a part of the temple complex, is also pending in the court since 1991.

Rastogi had also claimed that the Kashi Vishwanath Temple had been built over two thousand years ago and the temple was demolished by the Mughal emperor Aurangzeb.

Advocate Vishal Singh, the Court-appointed special assistant commissioner, in Varanasi, said that the survey was conducted in an unhindered manner.

Commissioner of Police Varanasi, Satish Ganesh thanked the people of Kashi for their cooperation during the three-day survey, and said, "We spoke with all stakeholders and reached a consensus that it's important to follow court's order. We also cleared people's misconceptions and worked on confidence building. The three-day survey has ended."

The Supreme Court will hear a plea against the Allahabad High Court order on May 17 which dismissed a petition challenging a Varanasi court's order to appoint an advocate as a court commissioner to inspect the Gyanvapi mosque complex.

A bench comprising Justices D.Y. Chandrachud and PS Narasimha will hear the plea filed by Committee of Management Anjuman Intezamia Masajid Varanasi. On May 13, the apex court had declined to immediately stop the survey of the Gyanvapi mosque in Varanasi, and agreed to list the matter. Senior advocate Huzefa Ahmadi, representing the petitioner, mentioned a plea before the top court filed by the Committee seeking a stay on survey of complex.

The plea challenged the validity of Allahabad High Court's April 21 order, which dismissed the plea against the civil court's order for the survey. Ahmadi mentioned the plea before a bench headed by Chief Justice N.V. Ramana. The bench said: "We don't know anything about the matter... We have no details. How can we pass the order?" Ahmadi said "please grant status quo", and added that the mosque has been covered under Places of Worship Act.

The bench said, "Let me look at the papers, let me see..." A Varanasi court on a suit filed jointly by five Hindu women, last month ordered an inspection of the premises through advocate commissioner Ajai Kumar Mishra. The Allahabad High Court affirmed the civil court order. The petitioners urged the court for year-long access to pray at a shrine behind the western wall of the mosque complex. The women petitioners also want permission to pray to other "visible and invisible deities within the old temple complex".

On May 12, a Varanasi court ordered resumption of the video survey of the Gyanvapi mosque complex, including the basement and closed rooms. The Muslim parties had objected to the survey.

The court said the survey report should be submitted on May 17. The Varanasi court also declined to entertain the demand of Muslim parties to remove advocate commissioner Ajai Kumar Mishra, instead appointed two additional commissioners -- lawyers Vishal Singh and Ajay Pratap Singh -- to assist him.