Will do everything to protect nation's security: Amarinder Singh 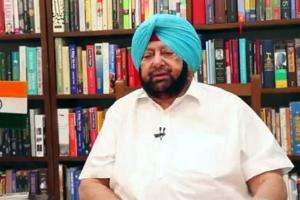 
Taking strong exception to the so-called 'warning' by Akali Dal chief Sukhbir Badal on recent arrests under the unlawful activities, Punjab Chief Minister Amarinder Singh on Wednesday said he will do everything under the law as needed to protect the security and integrity of the state and the nation.

If there are any specific instances of wrongful arrest or registration of case by Punjab Police under the Unlawful Activities Prevention Act (UAPA), as he has claimed, Sukhbir should send him a list instead of making unnecessary noise, said the Chief Minister in a statement.

There was no question of falsely implicating anyone, he said, urging the Shriomani Akali Dal chief to refrain from playing into the hands of the separatists by trying to incite the state's youth, especially Sikhs, against the police force.

Pointing out that the UAPA had been in existence for long, the Chief Minister reminded Sukhbir Badal that under the SAD-BJP regime, more than 60 cases under UAPA had been registered in Punjab, of which 19 were in 2010 alone and 12 in 2017.

Taking a strong exception to the so-called 'warning' by @Akali_Dal_ chief @officeofssbadal on recent arrests under the unlawful activities, #Punjab CM #AmarinderSingh said he will do everything under the law as needed to protect the security & integrity of the state & the nation. pic.twitter.com/JG9GD98VeO

Of the 225 individuals arrested in these cases, 120 were acquitted or discharged, indicating that indiscriminate application of the Act had in fact been done by the Akalis during their tenure, he said.

Amarinder Singh lashed out at the SAD chief for trying to compromise the interests of Punjab with his politically motivated propaganda against Punjab Police, particularly the DGP, whose professional and secular credentials were above board.

Next Story : Rajnath Singh: Those who want to threaten our territorial integrity