The deal was registered with the registration office in Mumbai on July 1, 2020, while the paper work was carried out on June 29 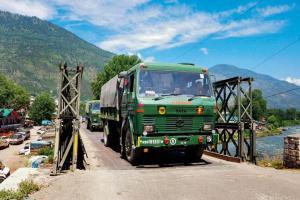 Indian army trucks depart towards Ladakh amid stand-off between Indian and Chinese troops, at Manali-Leh highway in Kullu. File pic/PTI

As per the report, the agreement was signed on June 29 between Subhash Chandra by his constituted attorney Bhaupatil Arote and Huang Xiang, the Vice Consul, for the Consulate General of The People's Republic of China.

Incidentally, this is just a fortnight after the bloody skirmish between India and China in Ladakh where Indian soldiers were martyred on June 15. Despite repeated attempts to speak to Zee spokesperson, the group chose not to respond.

Zee Media, promoted by Subhash Chandra advocates a strident nationalistic tone, including an aggressive tone against China and toes a line on boycotting Chinese products.

Subhash Chandra, the founder of the Zee group is a Non-Executive Director on the board of directors of the flagship company, Zee Entertainment.

As per the Squarefeat report, the lock-in period is for nine months and to terminate the agreement each party has to give three months notice period.

The bungalow let out to the Chinese Consulate General in Mumbai is located in Jolly Maker 1, one of the most sought after addresses in the city of Mumbai.

The deal was registered with the registration office in Mumbai on July 1, 2020, while the paper work was carried out on June 29, the report said.

Subhash Chandra on June 15, constituted a specific power of attorney to Bhaupatil Arote to carry out the lease and license work.

The ground floor of the bungalow has a living room, and a kitchen, the first floor has three bedrooms and one child bedroom, while the second floor has one bedroom.

The real estate website reported that the per month rent for the bungalow is Rs 4.90 lakh. The carpet area of the bungalow is 2,590 sq ft and the Chinese Consulate will also get to use two covered parkings. The rent agreement is for two years starting from July 1, 2020 and ending on June 30, 2022.

The bungalow can be used by the Chinese Consulate for its officers, staff, employees, and guests along with families for residential purposes only.

Since the incident in Galwan valley, relations between China and India has been growing bitter and post this incident, there has been a rise in anti-China sentiments in the country.

The Union Government has banned several Chinese apps, put restriction on imports and cut out Chinese companies from government contracts.

Next Story : Don't Ignore the OUCH!