There are charming anecdotes, such as when Asha went to see Mughal-e-Azam, when Sunil was just 40 days old. The movie was so long, she went twice: till the interval the first time, and post-interval the second time 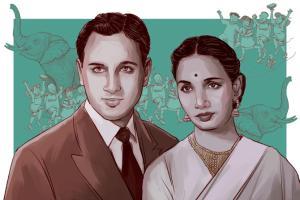 My column on my mother and Gulshan Ewing, When Life Gave Amma Lemons, She Grew Lemon Trees (April 26), received an avalanche of over 600 responses, more than any other article I have written. Clearly, it touched a deep chord. In addition to heart-warming responses on social media, a journalist I barely know, called and talked for an hour, saying she was overwhelmed after reading my column, as she remembered her own sacrifices, raising her daughter as a single mother. I was very touched.

This is why it can be so enjoyable and comforting to read other women's stories. I highly recommend, especially when locked down with the family during COVID-19, that children —especially boys—as well as men, interview their mothers and write about them: it will be a revelation. Most women have low self-esteem and don't think they're worthy of a book. But, even 'ordinary' lives can be fascinating. That is why I really appreciate Asha Anand's memoir, 1959: A Love Story: a tribute to joint and extended families (R350, available on Amazon and Kindle, published by Becomeshakespeare.com, 2018). Ashajee, as she is called, is the very accomplished wife of
Dr RK Anand, famous paediatrician and author of Dr RK Anand's Guide to Child Care, and she's now 80. She has been his solid support lifelong—taking care of the family, a symbol of national integration, working alongside him at his clinic for years, and backing several health campaigns.

Ashajee had visited her roots in Kerala after long, and initially wrote about her village life for her grandchildren—playing with elephants and swimming in the river. Later, she was persuaded that there was a wider readership for such a book. Born Annie Chacko in 1940 in Kottayam, she grew up to be a beautiful nurse, a Malayalam-speaking, fish-loving, Syrian Christian, who married the handsome Dr Raj Kumar Anand, a Hindu Punjabi, from a mainly vegetarian family. It is a dramatic story of how they got married despite family opposition, and raised their three sons, Sunil, Anil and Vivek. It all started when the late Russi Lala gave her a diary for her memoirs, and she started jotting notes.

The book has many delightful moments, and she cherishes her ability to nourish the extended family and other relationships. Ashajee's husband Raj has loved her unconditionally. He coolly beat Dilwale Dulhaniya Le Jayenge (DDLJ) in strategy: first, he said he would marry Annie (renamed Asha) only with the elders' consent, but if they didn't give it, he wouldn't marry at all. Second, when family trouble brewed, they quietly advanced the marriage date by two days and married Arya Samaj-style. Lover boys, I hope you're taking notes.

Ashajee has led an enjoyable life, including living in the UK, US and Mumbai. She handled the challenges of living in a joint family with diplomacy and humour. Once, when her mother-in-law said she would keep a separate kitchen, Ashajee calmly replied that they would all eat what she cooked. "If you find it difficult to adjust to your mother-in-law, you may later find it difficult to adjust to others too—to your husband and children," Ashajee observes.

Their belief in mutual respect and compassion, regardless of differences, has earned them friends and admirers worldwide, including from filmmaker Sooraj Barjatya, to their help Ram Singh and Shankar, whom they treated like family. There are charming anecdotes, such as when Asha went to see Mughal-e-Azam, when Sunil was just 40 days old. The movie was so long, she went twice: till the interval the first time, and post-interval the second time.

Next Story : 60 days of solitude