Mumbai is Upgrading, Morey is watching 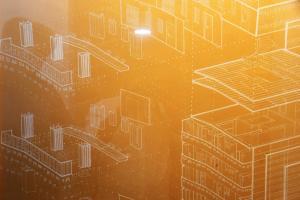 For a visual artist who has changed 12 residences, worked from 10 studio set ups and is now moving into a shared workstation in Borivali, space is a transitory concept, not a matter of steady ownership.

The transience shows in Pratap Morey's ongoing exhibition Concrete Ciphers, his second solo (first in 2015 titled measure | decipher) in which he underlines Mumbai's shifting landscape. The 18 art works at the Tarq gallery are minimalistic expressions of a Dahisar-based artist who has adapted with distinct city spaces since the eighties. His is not a rant against rapid industrial work; neither a lament about a space-crunched city. "I have accepted the city as she is. I am into the inescapable transmutability of spaces around us," the 37-year-old clarifies because he doesn't want to be associated with a 'pet peeve' or interpreted simplistically as "anti-redevelopment."

Concrete Ciphers underscores what once was shared and communal but unexpectedly became private-controlled, and conversely, what once was a silent, personal space that accidentally became open to scrutiny. For instance, Morey deploys the clothesline as a sensitive and recurring motif that is not merely true-to-Mumbai but applicable to most metros; the drying of inners in full public view is a matter-of-fact outrage that many Mumbai vicinities embrace as a matter of fact, however plush be their front porticos.

Morey nails down the spaces where the public and the private unwittingly merge, often giving birth to an awkward aesthetic. He has followed the city's skywalks passionately. He feels flyovers and gigantic bridges have long invaded the privacy of dilapidated old chawls; particularly busy highways running parallel to negligibly-curtained bedrooms. He feels skywalks and skyscrapers have gotten appropriated into older habitation systems, creating a 'new normal' which he catches in the maze-like drawings. He pinpoints the peculiar architectural style that the city has embraced as a matter of convenience.

Artist Pratap Morey at the art gallery Tarq in Colaba

Also, the congestion in his images depict the lack of vacant spaces in a Mumbaikar's life. The preoccupation with filling up every available public space - as if a vacant spot would mean a lost commercial opportunity - evokes strange imagery in the city.

Morey is particularly cognizant of the modular block construction in Mumbai's mega infrastructure projects. His art works underline the lack of imagination in the placement of blocks. Much like an architect's field guide, Morey shows the sameness in constructions, particularly with the use of archival ink and metallic canson fine art paper pasted on museum boards. Morey feels very little is being built, but things are assembled. He questions the definition of architecture in some of his explorations of current construction styles. His three dimensional relief structures bring out the 'assembled' glass towers which go close to children's jigsaw puzzle or a Lego game. "As pre-constructed chunks get aligned in a preordered setting, the engineering skill seems so achievable, and one doesn't even know if this can be rated as a superior skill…" In the work titled Floor.Space.Index, made of PVC sheets, Morey hints at the politics of promised amenities in decorative housing schemes.

Having lived in a range of far-off suburbs on the Western and Central railway route, he relates to the gigantic vertical space promised in colorful ads of homes on sale - Kalyan, Virar, Panvel neighborhoods lit up with swimming pools, morning walk facilities, snooker corners and community prayer halls. His images show the tiny living space that is eventually delivered by the builder!

Morey's understanding of the economics of space emerges from his very early tryst with living in distant suburbs of Mumbai. As a son of an Amravati-bound banker who bought a one-bedroom flat in Bhayander way back in 1985, he grew up in a maze of hastily constructed housing colonies.

His own building, bang opposite the Bhayander railway station, was declared unsafe as it was built on marshy land and tilting on one side. He recalls accompanying his parents and other society members to the local politicians to seek help in the dispute with the builder. The family lived in multiple short-term accommodations in Thane and Mumbai during this phase. Periodic displacement therefore became a distinctive feature of his schooling years; an integral reference point for understanding the city.

"Today when I look back at my life or profession, it is in terms of a montage of spaces; each space wearing a character of its own." At one point, after his graduation from the Vasai Vikasini College of Visual Arts, Morey worked in a hired space, close to his Dahisar house, which was rooted in the Agri-Koli community ambience. It gave him the vital community-connect that he longed for; also a rightful universe where he drew lot of self-portraits, some of which he exhibited at the Jehangir Art gallery. But as he left the studio after two years, he chose the digital image over canvas paintings. "Space ruled over or rather shaped my art practice."

As he could not store his work, he took to the camera and worked on computer-generated art works; often manual drawings on the digital images. A distinct juxtaposition has become the hallmark of Morey's works, some of which reflected in the eight-odd art residencies he has attended in India and abroad. In 2014, he stayed at the Rashtrapti Bhavan for a month, as part of the artists-in-residence program hosted by President Pranab Mukherjee, which was designed to shape the artist's role as a social ambassador. Morey photographed the Bhavan's architecture and created art works based on the images.

However, in his three-month residency in South Korea in 2017, he veered away from the digital and resorted to the studio-based practice of drawings. He stumbled on the polyvinyl chloride (pvc) blocks in the local markets near the Gachang Art Studio (Daegu), which he picked up for experimentation. The sheets have now gotten integrated with his art practice; the latest manifestation of which was seen in the current Floor Space Index series.

As Morey shifts to his new studio, an artist's bungalow in Borivali, two discrete raw materials are on his mind. First, taking inspiration from the use of aluminum panels for new age constructions, he is contemplating assimilation of aluminum as art material. Second, he will be in Gadhchiroli from February 11 to 13 as part of the Bamboo Training Program at the Gondwana University. As Morey connects with Gadhchiroli's adivasi youth, bamboo-related design ideas are expected to flow. Morey looks forward to the bamboo bends!

Sumedha Raikar-Mhatre is a culture columnist in search of the sub-text. You can reach her at sumedha.raikar@gmail.com