Aditya Sinha: Don't judge a book by your dogma 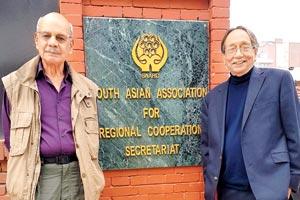 On Thursday, the three authors of The Spy Chronicles: RAW, ISI and the Illusion of Peace — former RAW chief AS Dulat, former ISI chief Asad Durrani and myself — received an email from Peter Jones of the University of Ottawa. He teaches at the University's Graduate School of Public and International Affairs, and has written Track Two Diplomacy in Theory and Practice, whose title is self-explanatory (it also has a foreward by former US Secretary of State George Schultz). Ayesha Siddiqa, a Pakistani scholar at the School of Oriental and African Studies in London, says he's been involved in Track 2 in our region since 2002, when he set up meetings between retired naval officers from India and Pakistan, based on a similar initiative between the Israeli and Arab armed forces.

Our book credits its origins to Jones. At a Track 2 conference in Istanbul, Turkey, he saw how well Dulat and Durrani got along and suggested they write an article together. This led to two joint papers: one was published simultaneously in The Hindu and in Dawn, the other is available on the university's website. Jones also roped the two former spymasters into an "Intel dialogue" that his university sponsored, in which retired intelligence officials from India and Pakistan participated. (National Security Advisor Ajit Doval was an early participant.) As dull as the joint papers were, they inspired Dulat to do a book. Kashmir: The Vajpayee Years, which he and I co-wrote in 2015, was a hit, and he was raring to do another. It also persuaded Durrani that a joint book would be worthwhile.

Jones immediately got on board. He paid for my travel and stay at the various international cities where we conducted the interview/dialogue sessions. I met him for the first time in Istanbul in May 2016, but he did not betray overt enthusiasm; in an act of foresight, he and his team stayed in the background though we were on his university's dime. In November 2016, he visited Delhi — I had gone off-project for a few months, but was ready to return again — and one night, over dinner at Dulat's place, he casually asked some questions about the book and my commitment to it. Two months later, we had our second set of sessions in Bangkok, Thailand.

I never saw him again. I always presumed it was because he was busy. He didn't answer any emails; when I proposed that October 2017 would be our last set of sessions, his assistant sent an email that sounded very much like a sigh of relief. Last month, I wrote to him to invite him to attend our book launch in Delhi — we have a launch in Mumbai on Thursday — but there was no response. Until last week.

In the meantime, The Spy Chronicles launched, and the controversy over it in Pakistan was so intense that poor General Durrani found himself summoned to the army GHQ, where a court of inquiry was instituted against him and he was banned from leaving the country. In his email, Jones expressed regret over Durrani's troubles and told us that an Indian journalist had contacted him for comment. "Our reply was that the Ottawa Dialogue has no comment," he said, "other than to say that the book was written by the three of you after private discussions to which (we) were not privy." He acknowledged the discussions took place on the margins of Ottawa Dialogue events, and that he was pleased to be of assistance, but that we were the book's authors.

My wife laughed out loud when I read out the email. The whole thing was his idea. Though he had approved of the project over whiskey back in the winter of 2016, it is likely that he was summoned to Delhi sometime in 2017, where he may have been told by the government of India to lay off.

The government is unhappy with The Spy Chronicles. It is "unauthorised". It runs contrary to official policy towards Pakistan, which is a hardline, muscular policy. The mainstream media has, by and large, ignored our book because no one nowadays, especially in the newspapers, is courageous enough to act independently of the government. There have been a few reviews, and the two negative ones that have appeared on social media are by known supporters of the ruling party. Government-friendly journalists have sneered both at the book and at its authors. The establishment's anger in Pakistan is overt; in India it is covert.

It is an indication of India's current influence that even Track 2 sponsors anxiously toe the official line. The Spy Chronicles will no doubt sell on its own steam. Durrani, a man of military courage, will probably find his troubles receding once the Pakistan general election is over in July-end. Sadly, neither Dulat nor Durrani will likely be asked to attend a Track 2 event again. More tragic is the fact that even at the unofficial level, Indians and Pakistanis are dissuaded from looking for creative solutions to the bilateral madness they are hostage to.

Aditya Sinha's latest book, The Spy Chronicles: RAW, ISI and the Illusion of Peace, co-written with AS Dulat and Asad Durrani, will be launched in Mumbai at the NCPA on Thursday. He tweets @autumnshade Send your feedback to mailbag@mid-day.com

Next Story : C Y Gopinath : Stupid things we do and never think about