You realise that the story idea was primarily a base on which to try many joyous, inventive experiments with music and images, and in this, Gurung succeeds deliciously. Cannot wait for his next 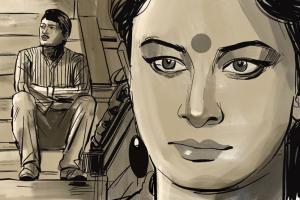 Few Indians have seen any world class cinema from South Asia, films made in our immediate neighbourhood. Kya, Nepal?! Bangladesh! Pakistan? Sri Lanka? Bhutan, Afghanistan…eye roll! Incredulous shock is the standard reaction. Yet, wonderful films from these nations have been at top festivals worldwide. South Asian films are also showcased at Indian/South Asian film festivals overseas, including in London, New York, Los Angeles, Stuttgart and Florence, apart from Indian film festivals. I recently saw Shirish Gurung's debut feature Lato Kosero (Owl) from Nepal—something of an overlooked gem—as a member of the jury of the ongoing Coalition of South Asian Film Festivals (Co-SAFF) that runs from October 3 to 17. The film is also on Amazon Prime UK and USA (not India/SAsia, sadly); Gurung is based in London.

Certainly, our jury considered far worthier films. Gurung's Lato Kosero is no heavyweight; nor is he yet in the league of Nepal's fine directors such as Deepak Rauniyar or Min Bahadur Bham. His storyline is slight: a man in the pursuit of happiness. But, his storytelling has such a delightful inventiveness. And, it is thrilling to see a philosophical film from Nepal, told in a refreshing, modernist language. It's a beautiful black and white film, set in architecturally gorgeous Bhaktapur, that opens with a man on a terrace considering suicide, and the marvellous line, "What a lovely day to abandon this world once and for all." (He quickly changes his mind the moment hot tea arrives). Bishnu Shrestha (Nivan Shilpakar) is a useless chap, unable to get a job or pay the rent; he has a nagging wife, and is jealous of his buddy Gokul, who has a foreign job, gadi and bangla. He meets a shaman, Saraswati ("Buy happiness here"), who sets him seven tasks to attain paradise now. While lightly comic throughout, Gurung comments on unemployment, changing social values and the political situation, via a "possessed left arm." The film was shot in 2013; a commentator observed that Nepal has long been in political turmoil, and Bishnu, too meek to join the guerrilla movement, fatalistically lets a shaman decide his future.

Gurung, who wrote, directed, shot and edited the film, elevates it with an outstanding selection of diverse world music. It includes the atmospheric The Night of the Sceptic by Tin Hat Trio; Mamman Sani Abdoulaye's Bodo, from Sahel Sounds from the African Sahara; and a range of Nepali music—Thais por tangos by Urjazz, Shreya Rai, Bachchu Kailash, Seto Makura; Dapha Newari devotional music and old, Bollywood-style Nepali film music. This "handmade" film is shot in evocative black and white; but there is such a playfulness with technology and archival elements: the film was shot on a digital camera, the Canon EOS 5D, then lovingly layered with the crackling pop and hiss sound effects of an old 35mm film screening. While using archival footage of Bhaktapur shot in the 60s—but taken off YouTube—the aspect ratio changes to 1930 x1080 (Gurung explained), and he gives the frames curved edges for that 'old-timey' look. You realise that the story idea was primarily a base on which to try many joyous, inventive experiments with music and images, and in this, Gurung succeeds deliciously. Cannot wait for his next.

Next Story : I miss your clothes