Don't end the year without watching these: my recommendations of the Top 10 Indian Films of 2017 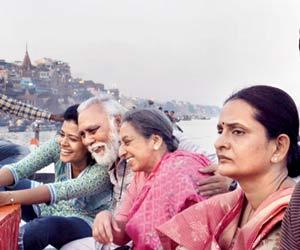 Don't end the year without watching these: my recommendations of the Top 10 Indian Films of 2017:

1. MUKTI BHAWAN (Hotel Salvation) by Shubhashish Bhutiani: This year's Lunchbox. A poignant reflection on death. In accepting their dad's decision to go to Varanasi to die, this family learns how to live. Elevated by Asad Hussain's witty dialogues. Opening at the Venice Film Festival, it has been to 50 festivals, and signed for 40 territories worldwide. With Adil Hussain, Lalit Behl and Geetanjali Kulkarni. 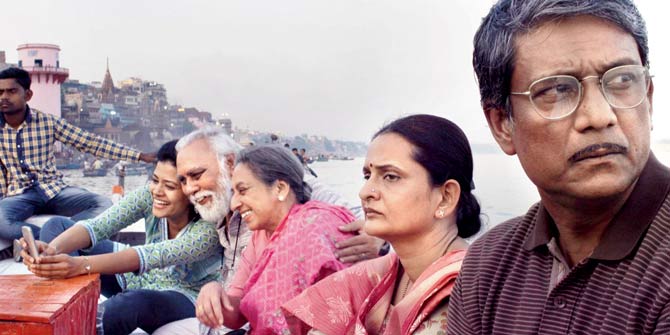 A still from Mukti Bhawan directed by Shubhashish Bhutiani

3. A DEATH IN THE GUNJ by Konkona Sen Sharma: The superbly atmospheric debut feature of the gifted actress, it observes how both men and women find gentleness in a man provocative. Was at Toronto. With Kalki Koechlin and Vikrant Massey.

4. ANAARKALI OF AARAH by Avinash Das: A small-town nautanki dancer is exploited by politicians and the police, but she holds her own and publicly shames the sleazoids. Swara Bhaskar sparkles.

5. BAAHUBALI: THE CONCLUSION by SS Rajamouli: A spectacular fantasy epic in Telugu and Tamil, it showed Bollywood there are other big boys in the 'hood. Baahubali and Bhallaladeva clash as the former learns of his true identity. The film earned Rs 1,530 crore according to boxofficeIndia.com, and even opened at third place in the US box office, above The Circle with Tom Hanks. With Prabhas and Rana Daggubati.

6. LIPSTICK UNDER MY BURKHA by Alankrita Shrivastava: The wretched censors drew big attention to this small film that observes spunky small-town women fighting for freedom and dignity. With superb performances by Ratna Pathak-Shah and Konkona Sen Sharma.

7. KAATRU VELIYIDAI (Breezy Expanse) by Mani Ratnam, Tamil: A spectacularly-shot war-time romance between a fighter pilot and a doctor goes awry: the film explores how men abuse women they love, and women let them get away with it. With Karthi and Aditi Rao Hydari.

8. ARUVI by Arun Prabu Purushothaman, Tamil: A powerful, feminist satire. A gentle girl brought up in the lap of nature, is driven into a corner in the big city, but she fights back, using a TV reality show to deliver some home truths. With Aditi Balan.

9. ANGAMALY DIARIES by Lijo Jose Pellissery, Malayalam: This superb film celebrates the small-townness of Angamaly: Vincent Pepe wants to be a gang leader, but he must contend with his rivals, the pig-businesswallahs. The film comes alive with vivid detail, and an excellent ensemble cast headed by Antony Varghese.

10. THONDIMUTHALUM DRIKSAKSHIYUM (The Exhibits and the Witness) by Dileesh Pothan, Malayalam: Can you make a superb film around whether a woman, dozing in a bus, had her necklace stolen by a thief, or imagined it? Pothan shows you can, with Sajeev Pazhoor's marvellous screenplay, and excellent cast of Fahadh Faasil, Nimisha Sajayan and Suraj Vejaramoodu.

The Malayalis, Tamilians and Bengalis are often way ahead of Bollywood.

Special Mention must be made of Prasad Oak's Kaccha Limbu (Marathi) and Lokesh Kanagaraj's Maanagaram (Tamil), and the documentaries Rahul Jain's Machines, Vaishali Sinha's Ask the Sexpert, and Khushboo Ranka, and Vinay Shukla's An Insignificant Man.

Next Story : Fiona Fernandez: And the award goes to...