No man no cry 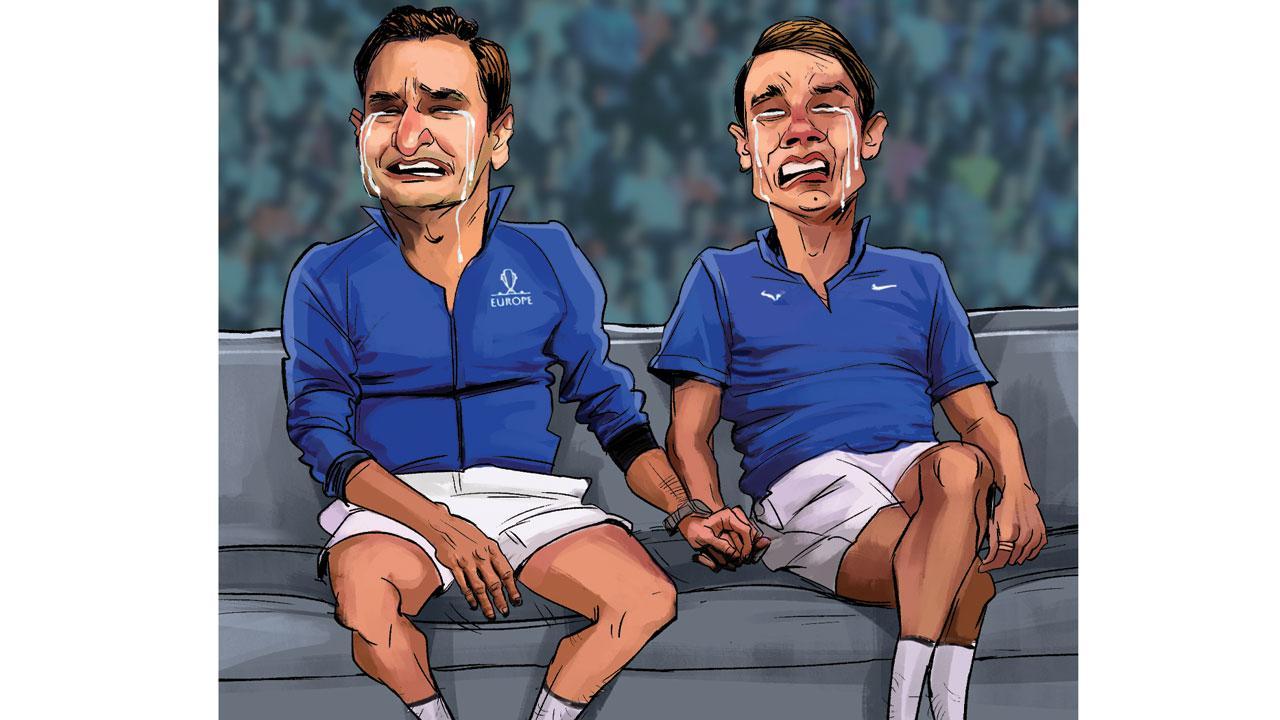 Have a question for you… kinda personal, but here it is— what are your thoughts on men crying? Uhm… I don’t mean in private, like when your dude is spilling his guts out, knowing no one else is spying on his show of outward vulnerability. Or at a funeral, when it’s kosher to let ‘er rip, and everyone’s having a bit of a sob.

No  I mean, when the situation is sad-ish, ‘senti’ or sorrowful, are you comfy with a bloke going ‘boo hoo hoo’ ?

Let me say at the start… I have nothing against men crying, even openly, I’ve seen men weeping when the right occasions arise (take Dharmendra’s lachrymose glands exploding when Bachchan pops it in Sholay).

See I love Roger, I dig Rafa, and its endearing when Roger first burst into tears years ago, kinda added to his charm.

But the Swiss and the Spaniard tennis legends, sitting side by side in white shorts and blue shirts, letting the old Croc tears flow, reminded me of two school boys punished outside the principal’s office facing detention, not knowing how to break it to their parents.

Look, I’m as metrosexual as the next guy, in touch with my feminine side and all, but I think it’s way cooler when there’s a struggle to hold the tears back… just saying.

Sure, Fed’s on his way out, sad day, no question, the new order has almost arrived, and the social media came to its knees with the sheer surprise, of the two warriors, suddenly with their lips quivering, no doubt a photo that the world will never forget in a hurry.

But I’m old fashioned... I want to see that internal churn, if you’re gonna cry its gotta be man tears, I mean Mac and Connors and Borg didn’t retire amidst sobs. (Mac was still screaming at umpires even on retirement, but that’s a separate issue).

If truth, be told, ladies, so far every woman I know has roasted me alive, for my views.

A small dispstick research I did among a few women revealed that I was being a real meanie, totally chauvinistic, when I suggested what I did about the Roger-Rafa ‘Super Bawl’—One lady part swooning part scathing exclaimed, “You’re so uncaring, Rahul, it was so sweet, watching them cry!”

Another said, “You’re damn cruel. I felt a lump in my throat, don’t say anything about my Fed, okay.”

One irate woman shot back at me, “It’s not just any man it’s the man of men, my Roger.”

So ladies, again I’m asking, when a man cries, whether mere tearing up or a torrent, do you go, “Awwww, that’s so sweet” or “Wow, didn’t see that coming” or “Poor baby, I wanna comfort him?”

Or are you thinking “Jeez, what a wimp.”

Since I can’t get most women to agree with me, here’s a  side observation that has had some takers, I’m relieved to tell you.

At that exact moment when the two aces were having a weep, did anyone catch a glance at Novak Djokovic standing behind them, also in a blue shirt and white shorts—nothing, ladies, and I repeat nothing prepared me for that expression of grief, that outlay of sorrow that I espied emanating from him.

The Serb’s face contorted to the extent that I mistook the  crying for constipation. It was fully Banner going into Incredible Hulk moment. Either that or it was a delayed weep for the Slams he had missed for not taking the vaccine shot.

So yeah ladies, don’t think of me as this cold unfeeling person, I can cry as much as the next guy. I can weep,  wail, whimper and howl, when the occasion presents itself.

Yours sincerely, An internal cryer.

Next Story : Bapu, behn & the Gandhians