The lit of Vasant Raiji 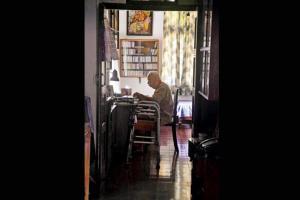 India's oldest living first-class cricketer and historian Vasant Raiji checks on a few notes prior to an interview with mid-day at his Walkeshwar residence on January 14. Pic/Pradeep Dhivar

Hindsight is a wonderful thing and it is there to be utilised. Vasant Raiji, India's oldest living first-class cricketer, who turned 100 on Sunday, could have been part of the BCCI's honours list in the year of his remarkable century.

Doubtless, Mumbai-based Raiji's work as a cricket historian over the years has made the early pages of Indian cricket history rich and wholesome.

Ranji, Duleep, Deodhar and Nayudu are names we often read and hear because domestic tournaments are played in their honour. To know more about these Indian legends is a Google search away now, but Raiji lent his hard-earned knowledge on them to books and articles in the most prestigious of publications long before the Internet became a compelling vehicle of knowledge.

The importance of a century was never lost on Raiji. His 1972 book Ranji — A Centenary Album (his second on the man whose name is associated with India's national championships) is so classy that it would sit better in a museum than on a bookshelf.

Of Ranji, our grand old man of cricket literature once wrote: "One could write a whole monograph of Ranji's performances, scores and statistics. But it would be a poor monograph. For, Ranji's greatness lies not so much in the runs he made but how, like Victor Trumper, in the process of making them, he lifted batting from pride to poetry, from science to art."

Talking about Trumper, the greatness of the Australian moved Raiji to write a book on the pre-Bradman era batting great and this came as a pleasant surprise to cricket lovers Down Under. It certainly caught the attention of ace writer Gideon Haigh, who later wrote Stroke of Genius — Victor Trumper and the Shot that Changed Cricket, in 2016. "The first book devoted to Victor Trumper would be published not in Sydney, not in London, not in Port of Spain, but in Bombay," wrote Haigh.

Raiji's volume on Nayudu subtitled The Shahenshah of Indian Cricket found favour with celebrated broadcaster and writer John Arlott who, in the 1990 edition of Wisden Cricketers' Almanack, wrote that the sub-title of the "important study" of Nayudu was "genuinely significant."

K S Duleepsinhji (Duleep) was another cricketer whom Raiji lent his literary might to, in a book co-edited by Vijay Merchant, Anandji Dossa and Vithalbhai Jhaveri in 1963. Australia's cricket-mad Prime Minister Sir Robert Menzies wrote the Foreword and ended it by saying, "Duleepsinhji gave us something of everything. He made no enemies, but a host of friends." What a pity the Duleep Trophy has paled in terms of significance and is now not played among the zones, but teams named Red, Green and Blue.

To Deodhar, who also completed a century in life, Raiji was a friend and an invitation to write a Foreword for the Nayudu book was met with zero hesitancy. "I am hopeful that Raiji's book will infuse the spirit and speed of CK's game in the new generation of cricketers in our country," wrote Deodhar. One look at the current Indian team would indicate that Deodhar's dream has been fulfilled and the BCCI must take some credit for it.

The BCCI, meanwhile, wished Raiji on Twitter, greetings that were carried along with photographs of former India captain Nari Contractor, 85, feeding Raiji some cake. Yes, it was Republic Day, a public holiday. Yet, it would have been nice had a Board official or someone from the senior management been part of those images.

Mumbai Cricket Association president Dr Vijay Patil presented a Ganesh idol to Raiji and Sunil Gavaskar followed Sachin Tendulkar and Steve Waugh with a visit, which was a nice touch. Incidentally, Raiji would have Gavaskar open the innings with Vijay Merchant for his dream India XI. Tendulkar would be one-drop in the side captained by Nayudu. Kapil Dev, who visited Raiji in 2012, is in the side as well, along with L Amarsingh and Mohammad Nissar.

Earlier this week, Rusi Cooper, who will complete his century in December 2022, dropped in to greet his contemporary.

Raiji would have a long list of people to thank for visiting him before, on and after his 100th birthday. Marcus Couto, the former first-class umpire and enthusiastic cricket lover, would top that list. It was Marcus who created the buzz around the milestone.

On afterthought, Marcus deserves a cake.

mid-day's group sports editor Clayton Murzello is a purist with an open stance. He tweets @ClaytonMurzello Send your feedback to mailbag@mid-day.com

Next Story : Together in resistance