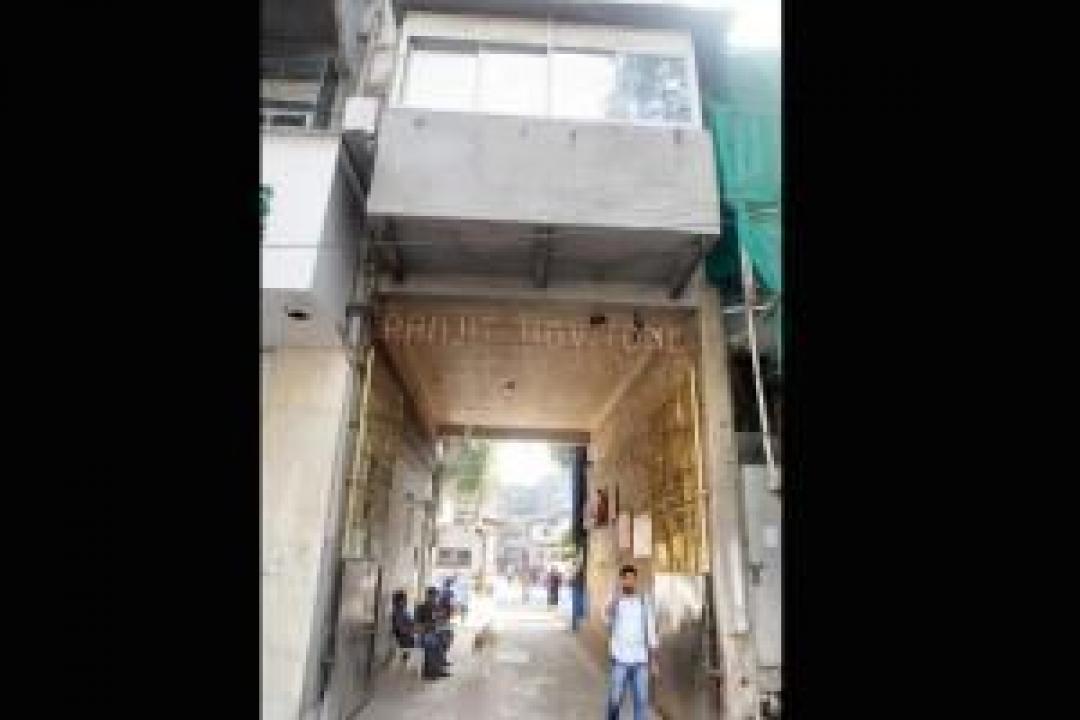 I was introduced to Dadasaheb Phalke Road because I had time to kill—waiting to watch Deewar at Chitra Cinema. "It's a hit, let's reach early for tickets," my mother said, promising plump Punjabi samosas in the interval. She had to, after our circuitously routed Bandra-Dadar No. 212 bus ride to fetch my Parsi Colony grandmother for the outing.

We walked behind the main Ambedkar Road. Mum pointed out Ranjit Studios and the chawl Meena Kumari lived in. I barely listened, undreaming that what I thought was her prattle would become my passion years on. 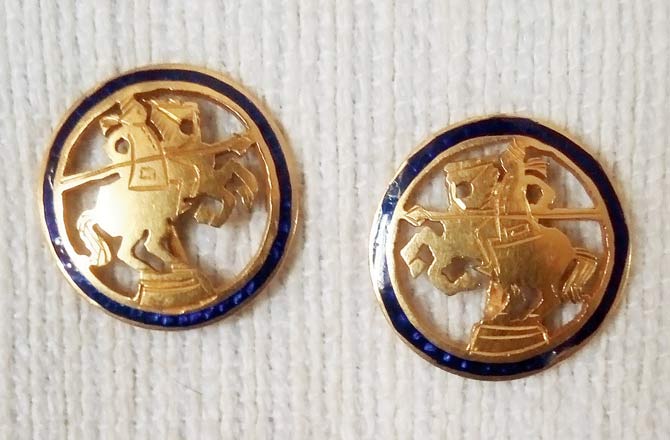 The studio emblem, of a rearing horseman with a sword, on the lapis-circled earrings of Chandulal Shah's grand-niece. Pic/Ashish Raje 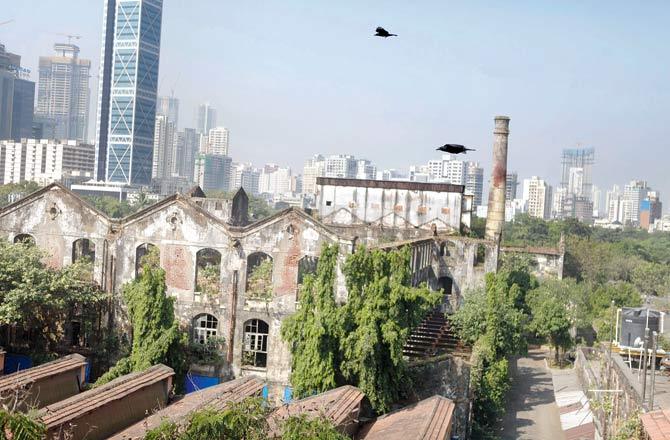 The shuttered Gold Mohur Mills, gutted in a fire 10 years ago, echo the strong last-century textile mill presence on this road

Trains and trams further joined the dots. The Great Indian Peninsula and Bombay, Baroda and Central India Railway tracks converged at Dadar, a major junction. To save travel money, though, mazdoors were restricted to walking distance from mills. This logic retained mass housing in the Dadar-Parel-Byculla belt.

We walk to Rangari Chawl and Sankeshwar Bhavan, across the deserted Gold Mohur Mill compound glimpsed through chinks in tall walls. In an eerily familiar scenario after Datta Samant's 1982 strike crippled the textile sector, this pre-Independence complex was gutted by a 2010 fire rumoured to be no accident. 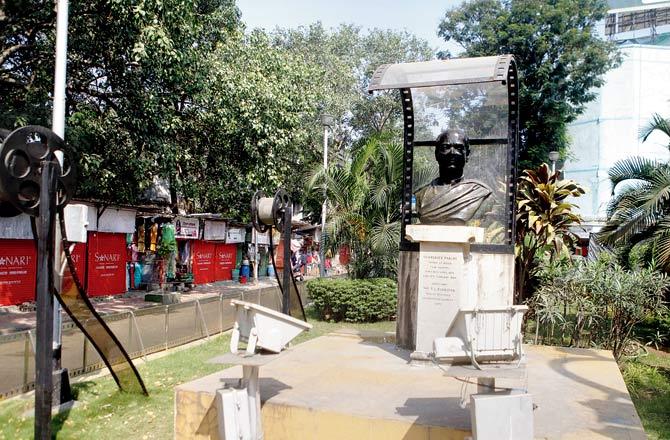 Dadasaheb Phalke Road, lined with saree shops, starts near Hindmata, where a bust commemorating the Father of Indian Cinema stands

Beyond Hindmata Cloth Market lies a maze of chawls, many Pathan-owned. Admiring their airy architecture, Janhavi explains, "That's why the Marathi phrase, 'Majha bajula Pathan sarkha ubha hota (He stood by my side like a Pathan)', meaning, unshakable as a landlord collecting his dues."

Rowed along cubbyhole saree shops and Kumar's Hairdresser, the Kamla Mehta School for the Blind was founded in 1900 by American missionary Anna Millard, for children losing vision in the 1887-88 Sholapur famine. The facility shelters girls from outside Maharashtra too. 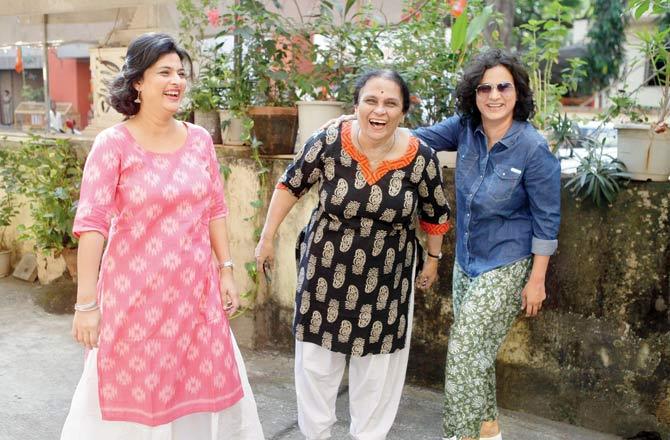 Sumitra Samant, flanked by daughters Janhavi and Tanvi, outside Loukik building in the neighbourhood Janhavi describes in a book published earlier this year

"Dadasaheb Phalke Road was noisy, vibrant, full of real people who tried and failed but had great stories to tell," notes Janhavi in the breezy book, Faltugiri and other Flashbacks: How I Survived a Childhood in the '80s. She was babysat by Istriwala Baban Kaka in Loukik, her "lacklustre building facing a green-less area", which nevertheless boasted a buzz.

Among scenes shared with honest humour is one on the excitement around the TV set in their ground-level home. So much so that, after a day at his clinic, her dentist father, Dr Vasant Samant, was barred from entering his front door by a gathered crowd, hushing him to be patient till a particularly tense mythology serial sequence climaxed to collective relief. 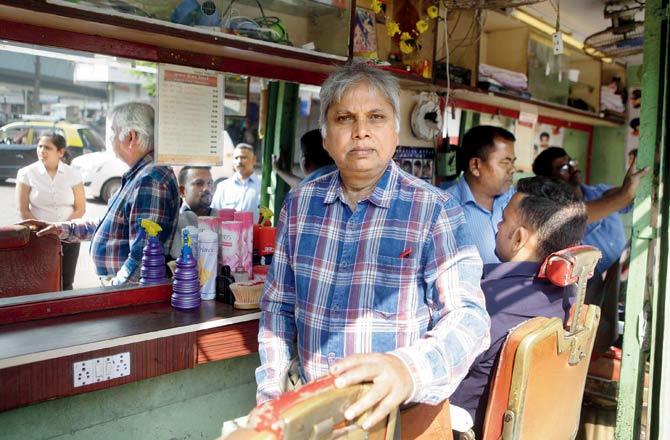 Suresh Kumar and his daughter Preeti at Kumar’s Hairdresser, the first barber shop he opened in the 1970s. The family has added three salons for men and women on parallel Ambedkar Road

"During weekly Ramayan and Mahabharat telecasts, the city came to a nail-biting stop as Rama fought enemies—arrow by arrow, spark by spark—and Ravindra Jain howled ecstatic devotion in the the background," Janhavi writes. "Cancer patients and their families from villages, convalescing at Shree Gadge Maharaj Dharamshala in front of our building, congregated in our house. Difficult to tell if someone after a gap was good news or bad. They returned the favour of watching TV in our house by bringing mithai, cobblers pretty mojris, an old woman had glass bangles for Aai. Back for repeat chemo, with sweets they brought hope that they were alive, willing to fight."

Sensing clear interdependency and neighbourhood kinship, I turn into Shinde Wadi, where a Lallubhai Mansion chawl resident suffered a splendour-to-squalor trajectory. Dancing superstar Bhagwan Dada, strapping-framed as a bodybuilder, light-stepped as Ginger Rogers, died in this tenement. The ace of comedy who, it is said, "had swag before swag got swag", was a mill mazdoor's son. Acting in 400 films, the writer-director of the first horror flick, Bhedi Bangla, in 1949, lived in a Juhu villa with seven cars, one for each day of the week, the Chevrolet and Beetle declared favourites. His Albela classics, "Shola jo bhadke, dil mera dhadke" and "Bholi surat dil ke khote, naam bade aur darshan chhote", still regale generations. At a Churchgate restaurant, composer C Ramachandra apparently assured Bhagwan he would score Albela's soundtrack "for the love of it". 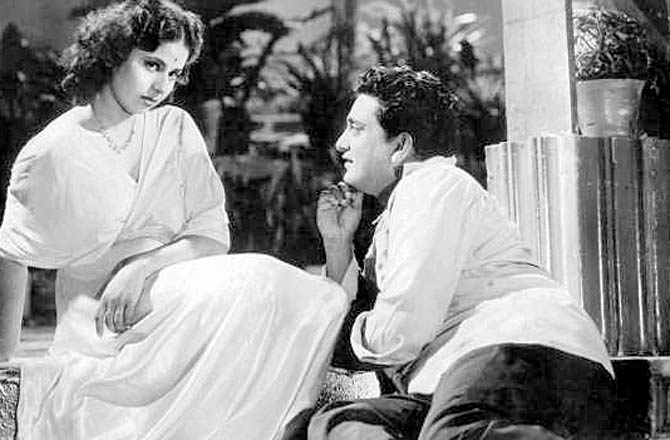 A still from the 1951 hit, Albela, whose dancing superstar Bhagwan Dada ended his days in Lallubhai Mansion chawl at Shinde Wadi here

Filmmakers of the '70s-'80s, using Ranjit, Roop Tara and Shree Sound studios, booked Chitra Cinema's preview theatre to see their movie rushes. Voices like the Mangeshkar sisters rehearsed at Shree Sound before appearing in front of a microphone. When Raj Kapoor performed the Awara muhurat in 1949 at Roop Tara, it was called Rang Mahal. He shifted location shooting to Shrikant Studios, Chembur, close to his dream studio nearing completion.

Raju Bharatan quotes a composer legend in The Life and Music of Naushad: "Every Mughal-e-Azam song by Lata Mangeshkar was recorded in no more than a tin shed of Roop Tara Studios. We urgently called for woollen blankets from the bazaar to shut off tinny vibration as the skies opened. Our technicians second to none, the finest recordings were executed by Robin Chatterjee in that daunting setting. The musicians, 20-25 of them, huddled in the same shed as my main singer. Yet, look at the calibre of each rendition cushioned by blankets!"

I chat with Janhavi's Natya Sangeet singer mother Sumitra Samant, granddaughter of "the uncrowned King of Bombay", SK Patil. She staged cultural programmes for the BEST, where she was Deputy PRO. The transport division employed typists and clerks who later enjoyed screen careers—"There was Sunil Dutt. Hasrat Jaipuri and Johnny Walker were bus conductors. We also had Marathi movie stars Prashant Damle and Arun Nalawade."

Originally from Jamnagar, Chandulal Shah named his studio mindfully. With an emblem of a rearing horse rider with a sword, Ranjit Movietone acknowledged cricketer Ranjitsinhji and his nephew Digvijaysinhji Ranjitsinhji Jadeja, Maharaja Jam Sahib, who monetarily helped Chandulal set up the studio. Digvijaysinhji was the wartime hero of 640 Polish women and children refused refuge by the British till he welcomed them to dock in his province.

An entire universe sprang as showbiz offshoots—a thriving Junior Artistes Association, City Video Library and Clapwala Enterprises set up by studio carpenter Dayanad Jog, rigging up clapboards when harried producers forgot these, painted on both sides for lefthanders. Chandulal Shah passed on the property to technicians staying steadfast when he went broke.

Not everything changes. Gully gossip and idle chitchat continue floating into homes. People like Mummyji, as locals know Somadevi Pandit, assiduously track the goings-on. Relaying crisp khabar from a permanently parked chair on the pavement outside her Shri Krishna Building room, she proves a font of trivia: how mill sirens sounded to announce the 7.30 am-3.30 pm shift and the 3.30-11.30 pm, who had what stitched by Garibi Hatao Gents Tailors, why flats around Loukik sold slow (word spread about a Tower of Silence there for deceased Parsis).

At their little fabrics shop next door, Mummyji's daughter Shobha Pandit tells me, "We moved from the grand Khodadad Circle, where my father ran Elphinstone Restaurant in Empress Mahal. But from the 1970s, we're happy this place is home."

Author-publisher Meher Marfatia writes fortnightly on everything that makes her love Mumbai and adore Bombay. Reach her at meher.marfatia@mid-day.com/www.mehermarfatia.com

Next Story : When the law and vengeance collide