Leibe welcomed the guests and thanked the Indian government, particularly the Indian Council for Cultural Relations (ICCR) for gifting the sculpture to the city of Trier 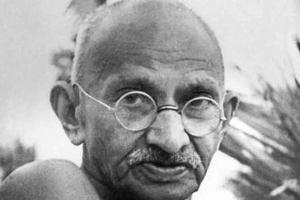 
A commemorative bust of Mahatma Gandhi's was unveiled by the Ambassador of India to Germany, Mukta D. Tomar and the Lord Mayor of Trier, Wolfram Leibe, as part of Gandhi's 150th birth anniversary celebrations at one of the oldest schools here, Auguste-Viktoria-Gymnasium.

The school orchestra also played a rendition of Gandhi's favourite bhajan, 'Raghupati Raghav Raja Ram', at the ceremony where representatives of the Trier city administration, academicians, the Indian community and other dignitaries were amongst those present.

Leibe welcomed the guests and thanked the Indian government, particularly the Indian Council for Cultural Relations (ICCR) for gifting the sculpture to the city of Trier. He highlighted the close relations shared between India and Germany while underscoring the school's commitment towards etching closer links with India through their ties with a partner school.

Meanwhile, Tomar shed light on the relevance of the Gandhian principle of non-violence to achieve peace, tolerance and understanding in the contemporary world at the event held on December 13 this year.

Furthermore, an official press release further mentioned that the Indian Ambassador lay emphasis on Gandhi's teachings of believing in oneself to effect change. She underlined his teaching towards natural resources and sustainable living by recalling his words: "The earth, the air, the land and the water are not an inheritance from our forefathers but on loan from our children. So we have to hand over to them at least as it was handed over to us.'

Earlier, the former Lord Mayor of Trier, Klaus Jensen, delivered the inaugural speech where he recalled the seven social sins identified by Gandhi which hold true even to this day. Out of those, Jensen lay special emphasis on four of the social sins - wealth without work, knowledge without character, business without morality, and lastly, science without humanity - during his speech. Students from the school also held a presentation named 'India Project', which showcased their perception and understanding of India at the ceremony.