The toll in the deadly 7.8-magnitude earthquake that struck Ecuador on Saturday evening has risen to 272 on Monday, with authorities stepping up relief efforts and activating all resources to cope with the disaster 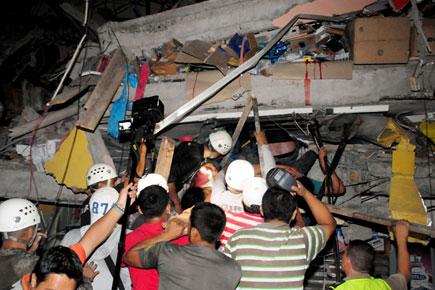 Quito: The toll in the deadly 7.8-magnitude earthquake that struck Ecuador on Saturday evening has risen to 272 on Monday, with authorities stepping up relief efforts and activating all resources to cope with the disaster. 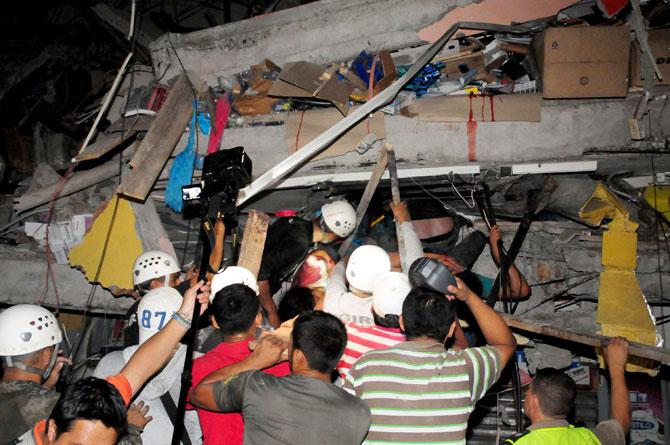 Rescue workers work to pull out survivors trapped in a collapsed building after a huge earthquake struck, in the city of Manta. Pic/AFP

According to Vice President Jorge Glas, nearly 2,500 people were injured and an unknown number are missing in the quake that has generated at least 189 aftershocks.

Officials said the toll was likely to rise as information began to pour in.

The whole country has begun to take stock of the situation and collect medicines, water, blankets, tents and food in order to send these to the hardest-hit places like the coastal Manabi province where about 200 people died, said Ricardo Penaherrera of Ecuador's national emergency management office.

The Ecuador government has deployed 10,000 soldiers and 4,600 police officers to the affected areas.

"Many highways are in bad shape, especially in the mountainous area, because it has been raining due to (the) El Nino weather phenomenon."

The governments of Colombia, Chile, Spain and Mexico were sending help for rescue efforts.

Ecuador's President Rafael Correa has cut short a visit to Italy to deal with the crisis.

"Everything can be rebuilt, but lives cannot be recovered, and that's what hurts the most," he said.

The tremor was centred 27 km southeast of the coastal town of Muisne, according to the US Geological Survey.

It is the deadliest earthquake to hit the nation since March 1987 when a 7.2 magnitude temblor killed 1,000 people.

Ecuador's quake was about six times as powerful as the earthquake that struck Japan on Saturday, the BBC quoted David Rothery, a professor of geosciences at The Open University, as saying.

A tsunami threat following the earthquake has 'mostly passed', according to the Pacific Tsunami Warning Centre.