30 years ago! When Sachin Tendulkar scored his first international ton 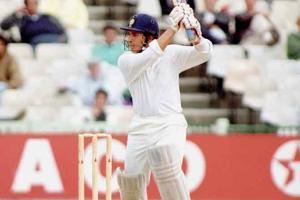 Long after the Old Trafford Test match becomes just another page in Wisden, the memory of a charming, almost embarrassed young man receiving the Man of the Match award will linger. Sachin Tendulkar will score many more hundreds for India but the freshness of this one will never fade.

"I was there," the spectators will say forever and what a tragedy there were only 1778 of them. Never was it more truly said that the loss was entirely theirs.

They say romantics never win. That they dazzle and depart leaving great tragedies behind them. Sachin Tendulkar proved them wrong with a hundred of such romance that the heart allowed itself to soak itself in it, the throat allowed a lump to form and an unknown force picked a sprinkling of spectators and brought them to their feet.

If Sachin (and pardon the use of the first name) had inherited his father's love for literature, he couldn't have written a better script. And one's heart went out to his brother Ajit, fiddling nervously with the radio, no doubt. After the Lord's Test he had blamed his presence for Sachin's failure since the boy had done no wrong till then. He would have grown three inches taller to see his little protégé come of age and do his country proud so many thousands of miles away from that hallowed land called Shivaji Park.

Tendulkar walked in at 109-4, having just seen (Sanjay) Manjrekar and (Dilip) Vengsarkar depart at the same score.

Twenty minutes later he saw his captain (Mohammed Azharuddin), on whom India had depended so much, edge into the leg trap.

Only once did he waver. When there was need for caution, he opted for adventure and (Eddie) Hemmings's weary hands that seemed destined to spin England to victory, let him down.

Thereafter he was the master of all he surveyed, his bandaged bat coming straight as a pendulum. When Hemmings bowled, he crouched and almost smelt the ball in a manner that would make his coach, Ramakant Achrekar (whom he publicly thanked later) proud. And when (Angus) Fraser and (Devon) Malcolm bowled, he stood upright like he was 10 feet tall.

As India inched along and the prospect of saving the game appeared real after all, he rose in stature. "Softly, oh softly, we bear her along," Sarojini Naidu's Palanquin Bearers had said. They would have sung in the same rhythm to see a young man carrying his side with the same feeling and care.

At Napier, the brashness of youth had cost him a hundred. Here too, the youthfulness was there, but only in physique. Mentally Tendulkar had matured more than most would in a lifetime, as he first reached his highest Test score and then a hundred.

His teammates appeared on the balcony and as Tendulkar took his helmet off, one realised once again, that the steely eyes it exposed had a strictly adolescent look behind them after all. There was no flailing of arms, no punching of fists, just a little smile and a raising of the bat.

For, it was a hundred that was achieved and celebrated with poise and dignity. What a tragedy that while television can show some picture of youthful achievement, brash, cocky and irreverent, in Andre Agassi, it cannot show another that would be such a fitting model for teenagers.

Spare a thought for Manoj Prabhakar, in the midst of a gruesome tour. He must have wished, at times, that he had the talent of Tendulkar. But he made up for it with determination in equal measure. He stood up to the test just as sternly and his bat had never been broader.

Admittedly there was an edge and Gooch, showing again what a great leveller this game is, put it down. For 150 minutes he battled in what clearly must be the most valuable innings he has played.

And as the covers were pulled on in Old Trafford, the sun made a fleeting solitary appearance to bestow his blessings on Tendulkar and as his innings became history, only memories remained.

They'll take some erasing, those.

51
No. of centuries Sachin Tendulkar scored in Test cricket, most by any player

11
Total number of tons Tendulkar slammed against Australia in Tests