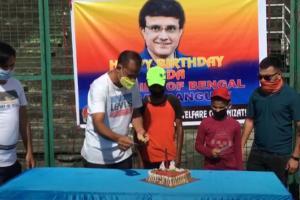 
The cricket lovers of Siliguri on Wednesday celebrated former Indian skipper and the Board of Control for Cricket in India (BCCI) president Sourav Ganguly's 48th birthday by cutting a cake.

While celebrating the birthday of 'Prince of Kolkata', the cricketer lovers followed all the guidelines of COVID-19.

Ganguly, who is celebrating is 48th birthday today, had made his Test debut against England in the summer of 1996. He immediately made headlines as he went on to score a century in his maiden Test at Lord's.

In the 1999 Cricket World Cup, Ganguly played a knock of 183 runs against Sri Lanka and was involved in a 318-run partnership with Rahul Dravid.

In 2000, the match-fixing scandal engulfed the Indian camp, and Ganguly was then made the captain of the side. It was a herculean task to manage the team in turbulent times.

As soon as Dada became the skipper, he started grooming new talent. It is a testament to his leadership that Yuvraj Singh, Harbhajan Singh, Mohammad Kaif, MS Dhoni, Ashish Nehra, and Zaheer Khan all came into their own with Ganguly under his leadership.

Ganguly first led India to the finals of the 2000 ICC Knockout Trophy. In 2001, another watershed moment came for the Indian cricket as the Ganguly-led side defeated Australia 2-1 in the Border-Gavaskar Trophy.

The 48-year-old Ganguly had also guided India to the finals of the 2003 World Cup and the side just fell short in the summit clash against Australia.

He had also led to an ODI and Test series in Pakistan in 2004. The Test series victory was a first for India on Pakistani soil.

Next Story : We heard nothing: PCB after Sourav Ganguly says 2020 Asia Cup cancelled