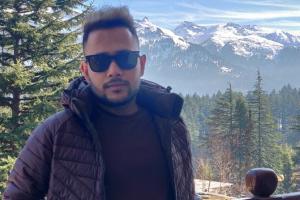 Meet Chethan Hiremath who “found” the ball that Royal Challengers Bangalore (RCB) player AB de Villiers smashed out of the Chinnaswamy Stadium into Cubbon Park, a meme that went viral at the time. In 2018 just having launched his Digital Marketing startup, Chethan Hiremath signed Royal Challengers Bangalore as a client with Okay Done Media. “It's one of the best things to have happened to us. I'm a huge fan of RCB and I've been that way since the inception of the Indian Premier League (IPL)”, he said.

"I love memes and I made a career out of it. Working with one of your favourite sports teams is a dream come true. The kind of work we did for them and the numbers we delivered is just a reflection of our passion towards the team. This is our second year working with them", he adds, when we asked who is currently handling Royal Challengers Bangalore (RCB) social media?

It's unfortunate that all sports events have been suspended due to the Covid outbreak and I strongly hope things will get better eventually and we'll get to see RCB in action. I know I say this every year but this could really be our year, i feel it.

Some of my proudest moments working with RCB:

1. When AB de Villiers smashed the ball out of the park, I made a 'found it in Cubbon Park' meme and the management told me they sent it to him on whatsapp and he laughed out.

2. As a fan myself, It was important to have RCB resonate with their fans' emotions and I pitched the idea of one of their most widely reached campaigns till date 'Ee Sala Cup Namde'

3. I was completely surprised and overwhelmed when Virat Kohli, AB de Villiers and even the Instagram handle for IPL reposted a video I wrote and recorded for Royal Challengers Bangalore (RCB) on how we need to stay strong during these testing times and continue to play even if glory is delayed.

When asked if he is open to the idea of working with other IPL teams,"Ofocurse! I love the sport and we're professionals so why not?, he adds. And finally when we asked him, If he could work with any two sports teams, who would he choose, he quickly responded with, "Indian Cricket Team & Manchester United".

Next Story : Yuvraj Singh apologises for remark on Yuzvendra Chahal